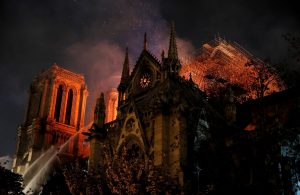 Looking at this picture, and watching live footage of the tragedy, it was impossible for His Imperial Majesty to not see something more than “just” a building burning.

Which is unavoidable, of course. Notre Dame is, after all, most definitely NOT “just a building.” It is one of the most famous symbols of the Church and Western Civilization and there it was, on fire and collapsing.

Because of an “accident”, of course. We were told by “authorities” immediately that that’s what it was, even before the Paris Fire Dept. had had time to roll out the hoses and connect them. An “accident”, no more, beyond a shadow of a possible doubt, and the media immediately and obediently clapped their flippers in unison, arfed on command and spread the word far and wide.

It might have been an accident, to be sure. Nobody knows at this point (or, if they do, they’re not telling), and ultimately it doesn’t matter.

We know that “accident” is going to be the established story, whether it turns out to have been one or not. No questions asked or permitted, lest somebody start wondering if it was some people who did something.

Still, a sentient being might wonder how come France is suddenly so accident prone. One might ask how anybody can know, with such unwavering certainty, that this was an accident in a country where close to 900 churches were the targets of arson, vandalism and desecration in 2018 alone. One might also ask how churches in Germany seem to have become bafflingly accident prone.

Or, perhaps more importantly, one might wonder why churches in Poland and Hungary HAVEN’T.

Is there some sort of correlation here that we’re not supposed to notice?

We ask, of course, purely rhetorically, because everybody and their brother knows that yes, there is, and we also know what this mysterious correlating factor is.

Just as we know that the Lying Media are going to keep lying about it.

Just as we know that nobody believes their lies anymore.

So what comes next?

Looking through history, we all know what comes next. We just don’t know when it comes. But come it will.

Many people, oblivious to history or perhaps just willfully ignorant of it because the inevitable conclusions it provides are legitimately terrifying, dismiss it with a wave of the hand, saying “nothing comes next, it’s all over, forget about it. Game over man, game over”, citing the numerous times that everybody said “this is it” in the past, only to be proven wrong when “this” turned out to not be “it” and the sheep went back to sleep.

Those people do have a point. We all remember how everybody, to a man, ourselves included, just KNEW how Black Tuesday was “it”, that henceforth Islam would be a religion only followed in Hell and then… well, none of that happened. Or all of the other acts of terrorism that surely, absolutely would mark the point where Western Civ was going to put their foot down and yell “we ain’t going to take it anymore, prepare to die!” Except none of those marked any such point.

The thing about sudden upheavals, points in history where “everything changed” is that they came as absolute and total surprises to the people living at the time.

One might easily dig through mountains of books and determine, with pinpoint accuracy that this or that even was the point in time when the apple cart tipped over, but what’s always overlooked in essays identifying such monumental turning points are the countless potential turning points that preceded them, yet led to nothing.

It’s easy for somebody today to point to the invasion of Poland in ’39 and say “HA! this is where WWII started!” It certainly was, but what about the Sudetenland? The Anschluss? The reoccupation of the Rhineland? Why didn’t they trigger the whole mess. The people living at the time sure as Hell weren’t so cocksure that those events weren’t going to start anything.

Upheavals have a way of continuing to not happen endlessly until they do, and everybody’s caught flat footed when that point is reached. Then, twenty or so years later, everybody “just knows” what caused it and spend thousands of pages describing how “anybody could see that this or that would happen”, it was “plain as day” etc. and so forth. We guess the idiots actually living through those events were just too damn dumb to see it, right?

So the next upheaval is going to surprise everybody too. Not the upheaval itself, what can’t go on won’t go on and at this point it’s all but inevitable, but the timing of it. Like a thief in the night.

For decades, the steam has been building up, every fresh atrocity, insult and injustice adding a small amount of pressure and inevitably the kettle’s going to blow.

And when it does, the resulting actions are not just going to exact revenge for whatever event triggers it, they’re going to be about repaying every single repressed slight, every tolerated act of intolerance, every rape, every murder, every last damn thing that those holding their anger back have been adding up on their lists, and they will remember every last detail.

It will all come out, reprisals for it all. With interest.

Because that is how it’s always been, throughout all of human history.

This will be no different.

Ah, so that’s what makes people think conspiracy. It could well have been a construction accident, but what exactly were they doing that was hot enough to set oak on fire? That takes doing to get up to 600ºF. Burning oak of course will melt lead in a hurry, but hmm. I don’t feel that we have enough evidence either… Read more »

It most certainly could have been an accident. Somebody doing repairs to the lead roof with a blowtorch, perhaps. Who knows? Thing is, with the years and years of hushing up everything in favor of the Preferred Narrative™ and the now endless litany of the Lying Media lying their teeth off, who is willing to believe them now? It doesn’t… Read more »

There was another fleeting comment I picked up from the media on ND burning, that “there were no workers present when the fire started” so no one was injured. Pray tell then who did start it? Jacques the mason leaving his smoldering Gitaine cigarette butt on the eaves, or even on a wood beam, would not set anything on fire,… Read more »

If this was arson and Macron and his morons cover it up, the truth will come and so will Madam Guillotine and he knows it. What probably happened was an electrical short circuit. 800 year old wood and hot wires don’t mix. It will be a few weeks before the investigation is completed of course. On the bright side of… Read more »

I have had the good fortune of visiting ND in Paris a few years ago. The wiring runs in conduit carefully placed on the inside of the vaults, not above same as no one wants to drill through blocks of stone. Am still not convinced this was “an accident” given the lack of security and the hundreds of workers (and… Read more »

And those of us here wonder why so many other incidences haven’t been the catalyst. First World Trade Center bombing; USS Cole; Khobar towers; Embassies; 9-11 (especially after all of the preceding acts); Benghazi and on and on. And I know I missed a bunch. In light of all that, I and all you Rotties really wonder at this point,… Read more »

Well, well, well – this did not take long to appear (from Vlad Tepes)

“Notre Dame is, after all, most definitely NOT “just a building.” It is one of the most famous symbols of the Church and Western Civilization and there it was, on fire and collapsing.”

So now it’s an even more accurate symbol of both the Church and Western Civilization.

True. And that’s why I’ve found myself beginning to think more and more along the lines of “maybe G-d’s trying to tell us something?”

LC Mike in Chi
Guest
Reply to  Emperor Misha I

“maybe G-d’s trying to tell us something?” Yes, indeed, a human construct that still stands, whose roof is now the stars and an honor to the one who gave us the greatest gift to mankind. and a prayer of praise for our creator with hope for us all. When all is said and done, may I be worthy. Magnificat Couronnée… Read more »

Misha, the timbers were old, the area a fire trap, construction, all it takes ids a spark, a piece of glass aimed in the wrong direction..a short circuit. I dont see any signs of tampering and neither has anyone else.

It’s quite possible that this was just an accident. It’s not hard to think of ways it could have happened. Thing is, it doesn’t matter by now. After 800-900 instances of Saracen arson, vandalism and desecration just last year, it doesn’t matter. After the various governments and media organizations all over the Western World having spent the last two decades… Read more »

French say so far no signs of arson. Misha: Ive seen a bushfire start because of a car exhaust sparks..another started over a piece of glass that sent a sun ray into some brush. Look..Notre Dame is centuries old, the timbers old and tinder dry, all it takes is a spark, a piece of glass, a short circuit, a bare… Read more »

French say so far no signs of arson. Actually, they started saying so even before the fire department had arrived on the scene. Which only proves that they’re awesome investigators. They can reach irrefutable conclusions to investigations even before they start investigating! They’re surpassed in their investigative powers only in their powers to stop German invasions. Listen, Brendan, I’m not… Read more »