What Was Old Is New Again 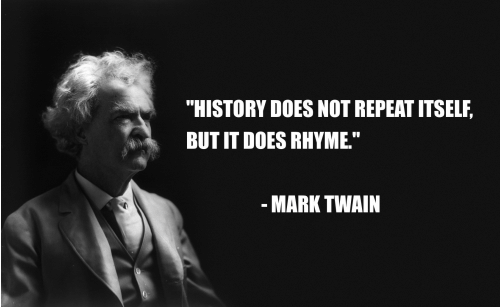 Samuel Clemens reportedly once said that “History does not repeat itself but it rhymes“.

Those of us who are students of history are likely to agree with this observation.  The track that the United States finds itself on appears to strongly resemble the history of late Rome, or Athens, or any number of civilizations that could not preserve a set of virtues or the ability to instill self-discipline within its population.  We long ago discovered that human nature never changes. Yet we still have been unable to learn how to adapt our societies to this fact in a permanent way, so we are left to Clemens’s cyclical nature of all things human over time. This cycle has been described in many ways, but the description I keep coming back to is this one:

Some of you might remember me saying that I have been studying politics and history for decades. Like most, I grew to adulthood considering government as part of the background of my life, like the sky, or the weather. I can still remember the moment that changed for me. I was in graduate school in business in 1984. I had received a fairly decent civics education

, so when I heard about the failure of the Continental Illinois Bank, and all the fuss about it being the largest bank ever to fail, it caught my attention. But what set me on my path was the “too big to fail” label that was soon applied to the situation. Something about that hit me wrong. I knew instinctively that failure was a market consequence that was every bit as important to the economy as success. This set off alarms in my head, and led to my study of the Fed, and then to following every thread before and since that eventful 1913 that I thought could help to explain why what I was learning was allowed to remain true.

While traveling this path, one of my side hobbies was to collect quotes I liked along the way. I titled this post the way I did because as a society, we have ignored this timeless wisdom for far too long, and I believe that the adversity we are encountering will drive more and more good folks to seek to make sense of it. These thoughts, I believe, are a good place to start.

I invite your comments, and if you have a favorite I did not include here (these are but a few of the hundreds I have collected), please drop it/them in a comment below.

On Banking
“The few who understand the system, will either be so interested from it’s profits or so dependent on it’s favors

, that there will be no opposition from that class.” – Rothschild Brothers of London, 1863
“I believe that banking institutions are more dangerous to our liberties than standing armies. “ – Thomas Jefferson
“The bold efforts of the present bank has made to control the government… are but premonitions of the fate that awaits the American people should they be deluded into a perpetuation of this institution, or the establishment of another like it.” – President Andrew Jackson
“It is well enough that people of the nation do not understand our banking and monetary system, for if they did, I believe there would be a revolution before tomorrow morning.” – Henry Ford
“The issue which has swept down the centuries and which will have to be fought sooner or later is the people versus the banks.” – Lord Acton 1834-1902
“Banking was conceived in inequity and born in sin. The bankers own the earth. Take it away from them, but leave them the ability to create money and with the flick of the pen they will create enough deposits to buy it back again. However, take it away from them, and all the great fortunes like mine will disappear and they ought to disappear, for this would be a happier and better world to live in. But if, you wish to remain the slaves of bankers and pay the cost of your own slavery, let them continue to create money.” – Sir Josiah Stamp, Director of the Bank of England in 1928, reputed to be the 2nd wealthiest man in England at the time.

On Government
“The end of democracy… will occur when government falls into the hands of lending institutions and moneyed corporations.” – Thomas Jefferson
“This country has come to feel the same when Congress is in session as we do when baby gets hold of a hammer.” – Will Rogers
“For a nation to try to tax itself into prosperity is like a man standing in a bucket and trying to lift himself up by the handle.” – Winston Churchill
“A nation of sheep will beget a government of wolves.” – Edward R. Murrow
“Depressions and mass unemployment are not caused by the free market but by government interference in the economy” – Ludwig von Mises
“The worst evils which mankind has ever had to endure were inflicted by bad governments.” – Ludwig von Mises
“Our most dangerous tendency is to expect too much of government.” – Warren Harding
“Giving money and power to government is like giving whiskey and car keys to teenage boys.” – P.J. O’Rourke
“Government breaks your legs

, hands you a crutch, and says, ‘If it weren’t for the government, you wouldn’t be able to walk'” – Harry Browne
“Government does not grow by seizing our freedoms, but by assuming our responsibilities.” – Michael Cloud
“Any man who thinks he can be happy and prosperous by letting the government take care of him better take a closer look at the American Indian.” – Henry Ford
“Government can have no more than two legitimate purposes, the suppression of injustice against individuals within the community and the common defense against external invasion.” – 18th-century English political philosopher William Godwin

On Human Nature
“Whoever expects to be ignorant and free in a state of civilization expects what never was and never will be.”
-Thomas Jefferson
“The hardest thing to explain is the glaringly evident which everybody has decided not to see.” – Ayn Rand
“Only a virtuous people are capable of freedom.” – Benjamin Franklin
“The world is a dangerous place to live; not because of the people who are evil, but because of the people who don’t do anything about it.” – Albert Einstein
“Only two things are infinite, the universe and human stupidity, and I’m not sure about the former.” – Albert Einstein
“When all think alike, no one thinks very much.” – Walter Lippmann
“It’s easier to fool people than to convince them that they have been fooled.” – Mark Twain
“There is nothing new in the world except the history you do not know.” – Harry Truman
“Underlying most arguments against the free market is a lack of belief in freedom itself.” –  Milton Friedman
“So the un-wanting soul sees what’s hidden, and the ever-wanting soul sees only what it wants.” – Lao Tzu
“Believing in free will and individual responsibility makes it difficult to find somebody to blame your problems on.” – P. J. O’Rourke
“It is difficult to get a man to understand something, when his salary depends upon his not understanding it.” – Upton Sinclair
“The further a society drifts from truth, the more it will hate those that speak it.” – George Orwell
“The ultimate result of shielding men from the effects of folly is to fill the world with fools.” – Herbert Spencer
“The degree of one’s emotions varies inversely with one’s knowledge of the facts.” – Bertrand Russell
“Our culture made a virtue of living only as extroverts. We discouraged the inner journey – the quest for a center. So we lost our center and have to find it again.” – Anais Nin

, here are a few quotes for the lighter moments in life that I chose to collect also.

“I feel sorry for people who don’t drink. When they wake up in the morning, that’s as good as they’re going to feel all day.” – Frank Sinatra
“Bigamy is a man having one too many wives. So is monogamy.” – Oscar Wilde
“You’re not drunk if you can lie on the floor without holding on.” – Dean Martin
“I didn’t attend the funeral, but I sent a nice letter saying I approved of it.” – Mark Twain
“I have never killed a man, but I have read many obituaries with great pleasure.” – Clarence Darrow

Thank you for this compilation. I for one find myself in agreement with most if not all the cited authors. The one that hits closest to home for me is this one, since it is very much where the United States of America started from but is not where we have ended up: “Government can have no more than two legitimate… Read more »

Interesting. I have not considered this from your perspective @sleeper, but I am betting the Founders would have agreed wholeheartedly. The plan for the federal government was to limit it to the common defense and interstate affairs. Federalism was far stronger then, and people were suspicious of the idea of a government above the states. We have made a dog’s… Read more »

That is a GO for your test. Since yesterday was getting white screen with “Can’t access database” error. It seems to have been fixed at some point this AM as when I checked at 6 AM EST it was still down. Thank you, wherever you are. :-))

I suspect that the downtime might be related to the AWS issues over the past couple of days. A couple of components here uses AWS, and when Amazon went down the other day, it took a lot of stuff down with it.

Yup, several airlines were shitting their pants for a while. Nothing like centralized service points for easy destruction.