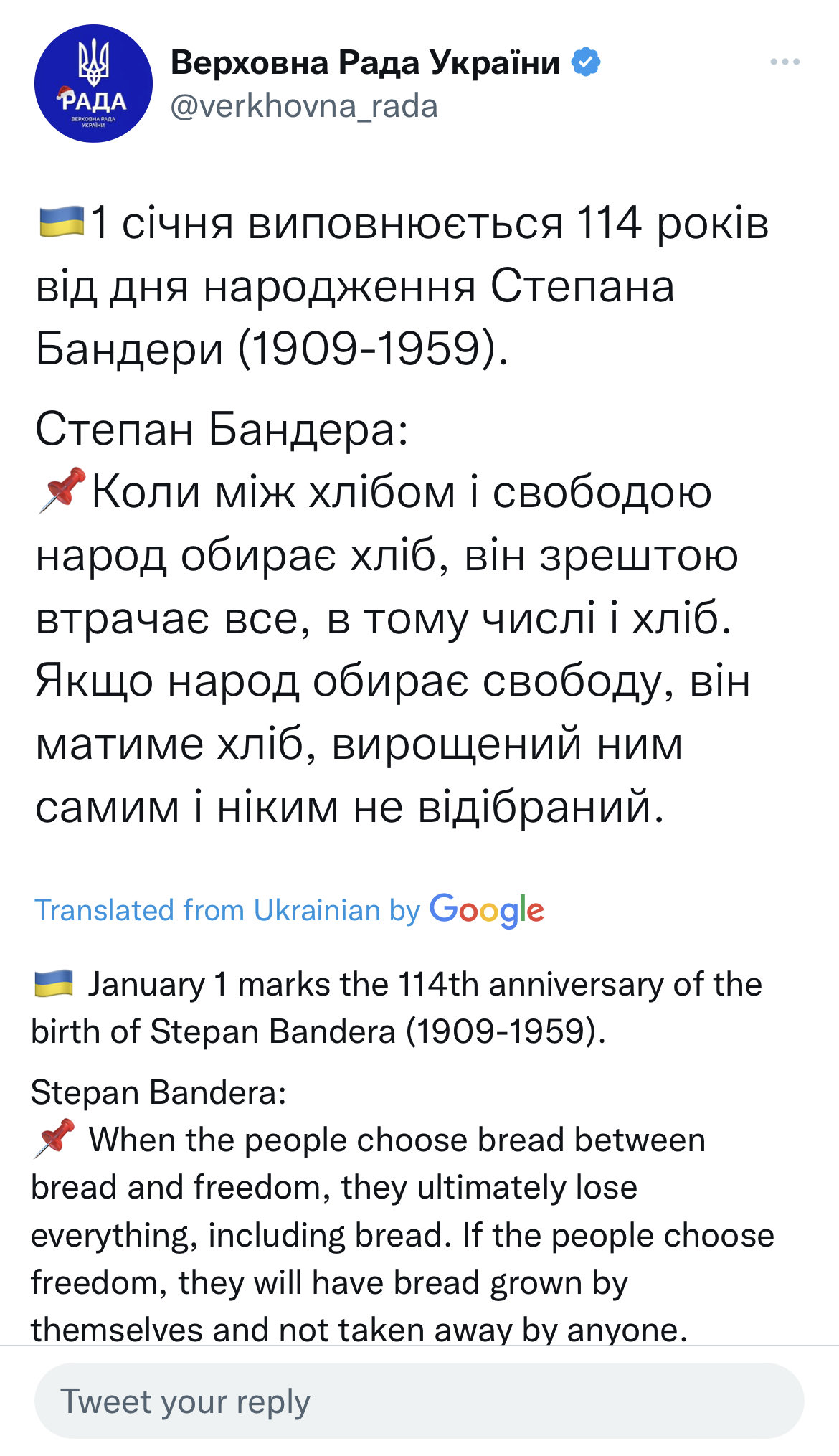 We’re sure that at least some members of the government of Ukraine are currently unhappy with whatever clown issued this tweet (then quickly deleted), because it surely didn’t help with the preferred manufactured image of Ukraine as an epitome of democracy, freedom and the American Way which must be defended at all costs:

If you still don’t know who Stepan Bandera was, then try to Google it. Or, better, Duck Duck Go it, since we’re fairly certain that Google will be scrubbing any mention of him soon if they haven’t already. Cliff’s Notes version: A REAL Nazi, not a “neo” one, the kind who was responsible for the murder of hundreds of thousands of Poles, Jews, Russians and anybody else not deemed sufficiently “Ukrainian”.

One of those Nazis that, according to our “media”, are all “Pro-Putin Propaganda”. Also one who is officially a Hero of Ukraine and whose birthday is a national holiday.

Which isn’t a new thing. Prior to the airbrushing of history, we have this article from five years ago.

But, hey, that never happened, right? We just happened to discover it and then forget all about it when we needed a proxy for WWIII without saying “WWIII”, right?

The Poles, to their credit, were not amused.

A Twitter post commemorating Ukrainian World War Two nationalist leader Stepan Bandera has been taken down from the website of Ukraine’s Verkhovna Rada (parliament) after protests from Poland, a Polish minister said on Tuesday.

Arkadiusz Mularczyk, a deputy foreign minister, said that Poland opposes any celebration of Bandera. While the Ukrainian is hailed as a freedom fighter by some in his native land, he is also held responsible for the murder of around 100,000 Poles by his Ukrainian Insurgent Army in what became known as the Volhynia Massacre.

Israel, unsurprisingly and understandably, also weren’t amused by “poor DEFINITELY NOT NAZI Ukraine” celebrating an eager participant in the Holocaust:

Verkhovna Rada tweet references Stepan Bandera, a Ukrainian ultra-nationalist and antisemite whose followers engaged in a campaign of ethnic cleansing against Jews and Poles during World War II

Let’s send them another $100 billion, why don’t we? While our own country is being swamped by illegal aliens and countless numbers of Americans are facing the choice between heating their homes and having dinner.

Or “Heil Hitler”, because that’s the American Way!

Oh, we hear it already: “But, Misha, you’re an idiot. Not all Ukrainians feel this way! We have idiots here at home too!”

But there’s a distinct difference between a bunch of insane Nazi LARPers dressing up in hilariously inaccurate SS uniforms singing “Deutschland, Deutschland Uber Alles” in a town hall in Bumfuck Iowa and Congress sending out a tweet celebrating the birthday of Adolf Hitler, don’t you think?

Or don’t you, as a matter of principle, THINK at all?

That’s a part of history I hadn’t learned in school. To be such a nutjob that the Gestapo thought he went too far… whoa.

It’s like the SS Dirlewanger emblem that some Ukrainian soldier had proudly stuck to his helmet that I highlighted in my previous post on the subject. The Dirlewangers were so sadistic that even members of the SS Einsatzkommandos, the ones infamous for G-d knows how many atrocities, found them too disgusting to work with. Whoops. Fell into the memory hole… Read more »

The nutjobs aside (and there are plenty in Europe and here), thanks for the publication of the original article, it allowed me to noodle out the words using what I remember of Greek and some of the Russian alphabet picked up over the years, remarkably was able to get quite a bit of it not having used Greek since the… Read more »

I posted this yesterday under a different topic. It belongs here. A new column at the Geller Report by jihad expert Robert Spencer explains that in 2019, a letter from 40 Democrats described Ukraine’s “Nazi Azov Battalion” as a terror group. Now some of those same Democrats are sending it billions of dollars. Explained Spencer, “One thing is certain: the… Read more »

EVERYBODY should read this. the bill contains nearly $45 billion in additional funds for Ukraine, according to the Ukrainian World Congress. What I find surprising and a little perplexing is that the Biden White House had requested only an additional $37 billion in aid for Ukraine in its appeal in November. So Ukraine is getting $8 billion more than Biden’s… Read more »

Sketchy source but interesting if true. These two would not pull out unless high threat to their person.

Billionaire Democrat donor George Soros has announced that a “scheduling conflict” is keeping him from attending the World Economic Forum’s annual meeting in Davos, but the hedge fund tycoon said he’ll be speaking at the upcoming Munich Security Conference—another consequential, if lesser known, gathering of world leaders. The WEF has received more publicity than the annual Munich Security Conference in… Read more »

WEF, a non-governmental organization located in Geneva, Switzerland, partners with Alibaba Group, Huawei Technologies and TikTok, according to the group’s list of partnerships, all of whom are allegedly tied to the development of various technologies the Chinese government uses for intelligence or military and intelligence purposes. WEF’s board of trustees also features an individual who’s worked with Chinese organizations allegedly… Read more »

I have a question and it’s not to do with Russia or Ukraine, but there’s no other topic open for comments. Here’s my question: Biden and the Dems want to get guns off the streets, right? So how does hiring 87,000 new IRS agents, who carry guns, do that? Wouldn’t it put more dangerous weapons out there?