Return of the Merchant of Death 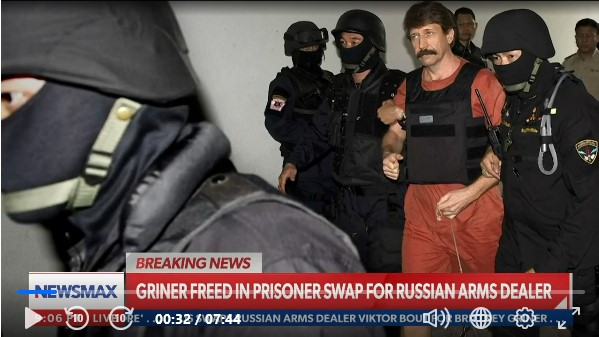 You have all no doubt heard the news today that some third rate (allegedly) female WNBA player was released by Russia in exchange for Viktor Bout. Arguably the dumbest trade ever made within the political sphere y a U.S. administration. Russia gets back an expert arms merchant and Biden gets a useless bint and maybe 10 minutes of air time with a pat on the head, to be forgotten by tomorrow if not sooner.

Now you begin to understand the long range planning that is in play, abandonment of billions in arms in Afghanistan, on top of which the useless administration sent pallets of cash to “help with humanitarian issues” faced by the Taliban, tribes that operate on 7th Century mores with zero concern for anyone beyond a meal, ammunition and an occasional infidel slave, in that order.

Bout will undoubtedly be in Kabul within the week negotiating to sell all that stuff to the highest bidder in Africa or S. America with a cut for the Talibs, his best bud Putin and of likely some for “the big guy”, after all, you do want to keep your pet useful idiot alive.

Oh sure, we are just channeling the Babylon Bee, but then how much of their satire has become reality over the last 2 years? Way too much it would seem.

Meanwhile, a real U.S. citizen named Paul Whelan sits rotting in a Russian jail, a former Marine totally abandoned by the administration. These people in Washington are no longer Americans by any measure.

On the very day the U.S. released a notorious Russian arms dealer known as the “Merchant of Death,” who was convicted of trying to kill Americans, President Biden spoke at the 10th Annual National Vigil for All Victims of Gun Violence, held at St Mark’s Episcopal Church in Washington, D.C.

I must admit I hadn’t put Bout together with the swag we abandoned and the cash to the Iranians. Unfortunately (for the U.S. and its allies), it fits all too well.