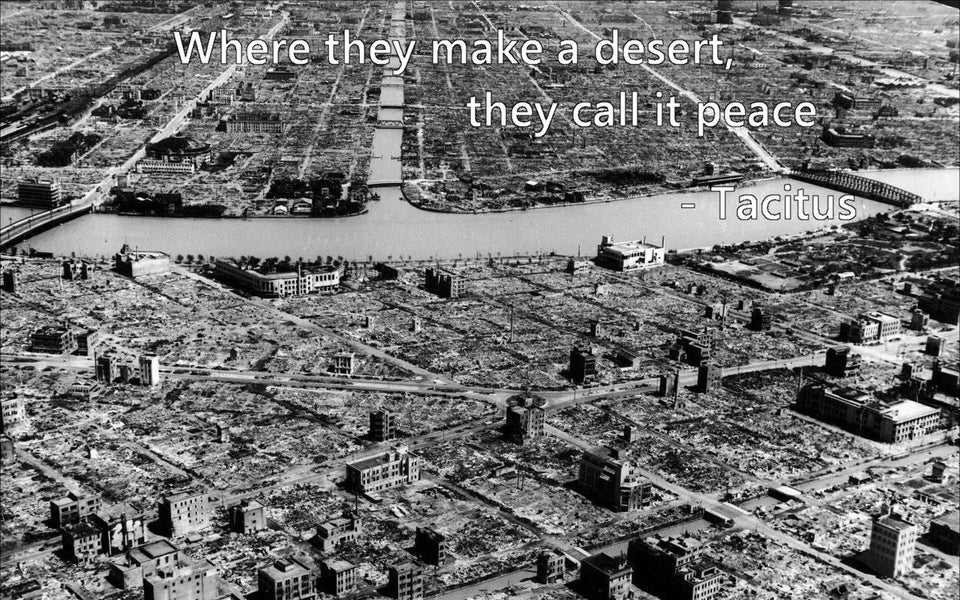 “They made a desert and called it peace.” – Tacitus. (Actually, Tacitus allegedly quoting the Caledonian chief Calgacus).

We’re not going to delve into a “whodunnit?”, “who started it?” etc., such discussions are generally pointless if one has ever spent any time studying human history and, besides, in today’s polarized society where everybody talks but nobody listens, it’s largely an exercise in futility anyways. What matters is what is, and where do we go from here to avoid a total, complete and utter cosmic clusterfuck?

Yes, we’re going to repeat ourself here, but we’re just trying to point out what we’re facing, rather than what we would like to be facing. We’re not saying that there is anything “just” about what’s going on, but we’re sure that most people who read this site would have already reached the conclusion that “fair” is not a factor. The world isn’t. It just is. So what do we do, whether we like it or not?

We don’t think that anybody can disagree that a nation invading another nation to force there preferences upon them is ever an acceptable way to solve a dispute. It might seem the only way to resolve it, heck it may even be the only way to resolve it at the time, but that doesn’t change the fact that when the big boys are busy swinging their dicks around, the only ones to get slapped in the face with them are the poor people who had no part in creating the mess that led to the situation.

Can we all agree on that, at least? People dying is a Bad Thing™, particularly civilians, no matter WHAT their nationality? Can we agree on that much, at least? Then, can we also agree that, even though war is not always the worst option, the cost of it still needs to be taken into consideration? Can we? Is that even possible in this age?

So here are the options as we see them, once again, but we could obviously be wrong. We’re just a humble Emperor, after all.

1) We can starve the Russians into submission and they’ll just give up and go home because McDonalds is closed. Oh, and the multitude of things that Russia cannot buy or sell anymore (that, in turn, is causing food lines, FOOD LINES to show up in New York) will have absolutely no catastrophic effect on the world as a whole. They’ll just say “oops, our bad”, and everything will go back to normal.

We may shrug it off for now, after all gas has barely crossed $7/gallon in California by now, so how bad can it be? Not that bad, provided that you don’t consume anything that ever found itself on the back of a truck. Pro-tip: That’s everything. Yeah. Everything. Oh, and then there is the multitude of nations who, unlike us, don’t have anything to spare to begin with. They’re already feeling the pinch in ways we can’t imagine. But don’t worry, the longer this goes on

, the more we’ll feel it too. The slums of Calcutta

, coming to a neighborhood near you, real soon. But don’t forget to put your Blue and Yellow avatars on Twitter, y’hear?

And this is going to make the Russians so despondent that they’ll just throw their towels in the ring. The same people who ate bread made of mostly sawdust in Leningrad for 900 days in order to resist the German siege. Those people? That’s as ridiculous as suggesting that Putin can starve the Ukrainians into submission, because they’re every bit as tough, if not tougher.

We’ll have a revolution in the U.S. over the rising price of Air Buds™ long before the Russians will start worrying about having to skip a meal. Just telling you. Ask any of the entitled millennials just how long they’ll be willing to go without their Multi Grande Venti Soy Latte Con Kales or Avocado Toasts (locally and organically sourced, of course) before they’d consider maybe giving up. They’ll lie, but you know the answer.

None of this to say that the sanctions aren’t justified, because they ARE, very much so, but if you’re pinning your hopes on them ending the conflict, you’ve got a big bowl of Disappointment Sauce with a sprinkling of Regret Lettuce on top.

2) We can fight to the very last Ukrainian. See the picture of this post. We may be naïve, but we don’t see how that’s going to change anything for the better for the people who are REALLY suffering right now, which is the Ukrainian people. Because they won’t, in spite of their heroic defense, beat the resources of Russia. It most certainly will take a long time, because the Russians are apparently not all they were thought to be, militarily speaking, but that will just create more rubble. See WWII, the last two years of, from a German perspective. Didn’t do much for them, and it certainly didn’t bring them the Endsieg they were hoping for, did it?

3) We can step in directly and crush the Russian Army

, we certainly can. That much should be clear by now. Well, we probably won’t quite get to celebrate that fact, because the entire world will be glowing in the dark before that happens but, what the heck, it was all worth it, right?

We’ll have our desert, but it will be a righteous one.

And it will most certainly be peaceful.

Given the stupidity of mankind, it might even be for the better.

I think the goal isn’t to “Starve the Russians into submission,” so much as to get the Oligarchs to act. They are actually beginning to hurt financially. (Billion dollar yachts don’t grow on trees after all) Can the Ukrainians win? Probably not. Can the Russians lose? They already have. Will Putin be retired and provided with the traditional copper jacked… Read more »

That is one of many unknown unknowns. Is Putin capable of doing a pivot then negotiating terms that Ukraine will accept and which will sell at home after losing as many troops and materiel, while still surviving as the top dog? The secondary unknown (to us at least), is whom would replace Putin and be able to keep the internal… Read more »

” or vegetable Joe’s handlers do something even more stupid. ”

I’m fairly sure that isn’t the number I’m putting the mortgage money on. Never underestimate the power of human stupidity.

Lead and iron, my friends.

Win or lose, Putin loses. And if he wins, see the picture above, for what he wins (plus his new world opinion). Problem is, he’s backed into a corner and unpredictable.

I have been far too long away from the Empire

Is the Bucha Pocket going to be a replay of the Korsun Pocket?