It can now be said

, rumination and inspection of chicken entrails (assuredly after consuming said chicken exquisitely fried), it has been determined that what is wrong with Washington D.C. is traceable to a single drug now being flooded into the DC , blue state and blue city markets named FUBARBITOL (c).

This product is very likely of Chinese origin and based on Afghan poppy extracts, enhanced with bat drool manipulated by laboratories in Wuhan and transported across the southern border from the failed state (not yet ours) named Meh ee ko, though some seems to filter in from Trudopia in Canuckistan

, down to the Pacific Northwest.

It has been shown to cause mass delusion, uncontrolled hysteria, total incompetence and in some cases, actual Tourretes outbursts paired with incontinence. This has been observed first hand in most “Civil Disservice” departments , spokespersons for the current quasi government occupying the capital and even the presumed live occupant of the oval office.

Highly visible in Washington , it has spread to all branches of federal government, captive state media organs ( CBS, NBC, ABC, MSNBC, CNN, PBS) and segments of FOX News, not to mention the Pentagon, the (so called) press, institutions of learning and related socialist electronic media companies.

The afflicted are totally disconnected from reality, experience complete loss of rational thought processes, believing themselves deities in charge of the universe with omnipotent words which by simple utterance

, change the course of rivers and completely dominate the lower classes (defined as all all who reject their insane behavior or question motives).

Biden tells yet another lie

Biden did not visit that synagogue

The poor sod has apparently taken large doses of FUBARBITOL regularly for the last 40+ years.

But then what is going on in your lands is even more insane. We at least can get rid of Biden by legal constitutional means, not sure about your countrymen..

Terrapod: we are in agreement, and the fallout from this will be huge. More than one Premier will be hammered at the next election. Gladys is now renouncing covid zero and lying her ass off that she never said it…the protests and anger are growing. She is premier by three seats…which she can expect to LOSE very soon. That and… Read more »

Impeach and remove them both.

Impeachment has to start in the House and won’t happen with Dems in control of House. Period.

First, I am not a lawyer, much less a Constitutional lawyer. But, the Constitution, which we all hold dear, as far as I can determine from multiple readings, does not have a remedy to undo it and put Trump back in. Nor does it specify any way for a mulligan (a “do over”). Not enough states had dual sets of… Read more »

Returning stolen stuff to the rightful owner is not that complicated.

Remember what Pres Trump said about YouTube, Facebook and Twitter? That they were publishers and not subject to Section 230? https://www.news.com.au/finance/business/media/media-diversity-inquiry-google-sky-news-acma-giving-evidence/news-story/046c4f2905f710018a2c9542b2b0c0a7 YouTube banned Sky News, a huge media outlet for reasons that are and were total bullshit This was what was said at the Parliamentary Enquiry today “YouTube’s actions make clear that it is not a neutral platform, but a… Read more »

Does anyone know WHY the State Dept. with Americans on board is stopping planes from leaving Afghanistan? And handing the manifests to the Taliban?

The short answer is based on the corollary to “never let a crisis go to waste” and that is “extend the crisis as long as possible” which in this case is at least until the mid term elections. IMHO they have jumped the shark, extending this is causing ever greater revulsion by and departure of D voters from that “party”.… Read more »

I have a cynical thought on that.
They Want our people tortured and killed in order to Manufacture Consent to Go Back in and get a Bunch of our military killed fighting the army WE ARMED.

Oh, that will be the coliseum on steroids. To watch as half their “party” wants zero military actions anywhere and in fact wants to destroy the military completely. Granted sending them back over without a plan, poorly equipped and supported, without serious leadership will indeed destroy the army along with whatever remains of the Bidenistas past November 2022.

(on the damage from Hurricane Ida)

Our troops are on their way home, mission complete. Biden is on the nose with Aussies, we we had to go in to fix his fuckup. Rumour has it that the soldiers were proud to have completed their task….and utterly fucking FURIOUS at US troops that sat on their hands. Afghanistan veterans here see it as betrayal, and call Biden… Read more »

Arizona Audit: The take-home figures revealed that 173,104 votes known to have been cast were lost or missing. Meanwhile, 96,389 “ghost votes” were mysteriously added to the tally, despite the supposed voters being unaccounted for.  the canvassing report, which was not associated with the long-awaited report from the state’s independent forensic audit of Maricopa’s 2.1 million votes. The canvassing effort… Read more »

THAT has control of the nuclear codes.

Found over at the Adaptive Curmudgeon’s blog.
A pretty good and positive view IMHO. Worth a look.
https://youtu.be/cFrs6ebb-8g

Brendan – an article for you. I’d be interested in your take on it.

Agree with all of it. The covid zero was crap when they said it a year ago, we all knew it.but the media sheep baaa baaa toed the party line. The fallout from this is going to be huge, not the least of which is the police have pissed all over their reputation. Aussies didnt like cops at the best… Read more »

But why are they cracking down on alcohol consumption? I tried to post some info I saw yesterday about the health authorities (are they the police) checking on care packages relatives sent people in apartment complexes (run by the government?) and taking wine and other stuff. What does alcohol have to do with COVID?

Is senility contagious? Here is Nancy Pelosi’s speech on Biden’s Afghanistan exit: “It was remarkable, even though it got off to work of hazy start. I think the president made the right decision to leave Afghanistan, I think we should have left a long time ago,” Pelosi said. Then her brain went rogue. “We should have stayed longer, in the… Read more »

Tomorrow is 9/11. Here in NYC it’s very serious. Someone I knew died in the attack. Biden has been warned not to come. 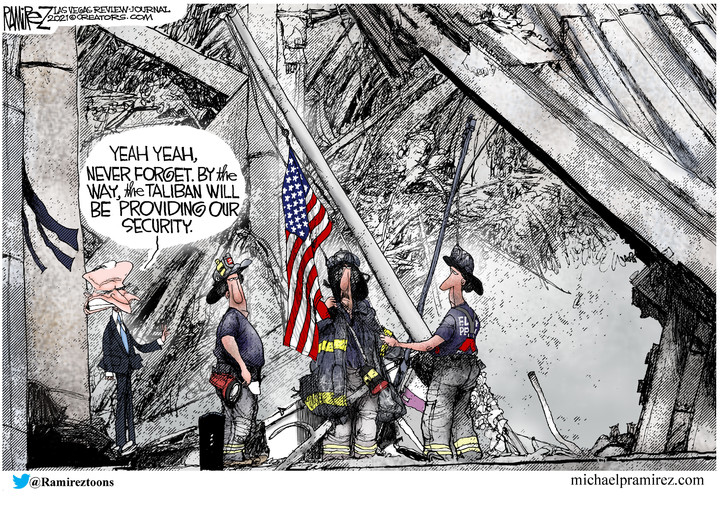