Looks like Abu al Dead Baggy just got his arse smoked while trying to hide behind three kids in a tunnel, choosing to blow himself up rather than being chewed to death by an infidel dog.

Reports state that he died crying, pissing his pants, whining like a whipped puppy and generally doing what cave-dwelling savages do when they realize that they’re about to get dead.

The Enemedia’s response was prompt and predictable: 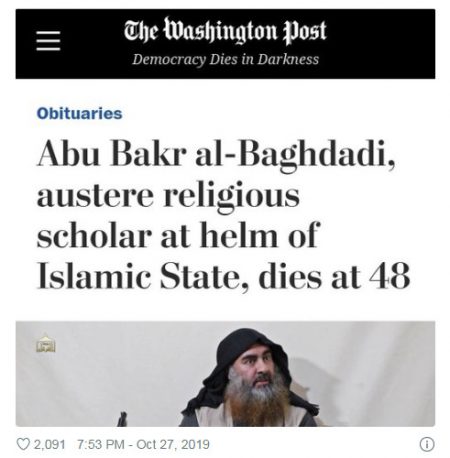 We won’t get into the many inspired parodies of the Compost’s beclowning, but personally, our first thought was Bezo’s hobby blog eulogizing Adolf Hitler as a great community organizer, artist, environmentalist animal-lover suddenly and unexpectedly passing away at 56.

The less notable responses from the Enemedia were along the expected lines of “killing terrorists will only make them stronger” (an interesting prospect, if you’re a teenager with the IQ of a cucumber) and the old “well I NEVAH!” from the Enemedia, NeverTrumpers (but we repeat ourself) reaction about the “lack of decorum” shown when the President referred to a diseased animal being put down as “a diseased animal being put down.”

After all, don’t we owe child rapists, animals who burn innocent people alive and broadcast the gruesome details globally the respect of an honored enemy?

According to the likes of Bill Kristol and his Jonahs

And then the hysteria over the President not briefing SchiffHead and Pelousy prior to the op so they could leak the details to their friends in the Enemedia and allow al-Toasty an opportunity to escape so they could impeach him for failing to get the guy.

As if anybody smart enough to boil water wouldn’t know that telling SchiffHead anything is only slightly less effective than just calling your intended target right away.

Personally, being born elsewhere and thus used to how nobody on the western side of the pond appear to be frightened of the consequences of not keeping your lips zipped (understandable, since said consequences can usually be summed up by “7 figure book deal and a permanent sinecure as a contributor on a major news channel” rather than “life sentence and eternal obscurity”), we’re just amazed that an American intelligence organization managed to keep their eternally flapping lips shut long enough for an op to be actually carried out before some arsehole traitor in the “intelligence” community, safe in the knowledge that treason has no consequences in the United States of America other than riches beyond avarice, had the details posted on the front page of the New York Times.

Who knows, maybe the Donald has actually managed to finally make “Top Secret” great again, even in this blabbermouth country, where nobody seems to be able to keep their mouthes shut for more than ten seconds.

If so, good for him.

And, more importantly, good for US.

Being of a logical nature and a long time student of U.S. politics, it is apparent to me that no leaks of the operation is directly linked to no Demoncrats being informed ahead of event. Further, based on past leaks, there is quite evidently a direct link between any “D” getting informed of military activity and the high OPSEC event… Read more »

No,no,no. That’s not the right angle at all. Hitler was a troubled war vet who committed suicide. Obviously WWII was a cry for help!

An “:austere Islamic scholar” who crawled into a tunnel, dragged three children with him and then killed himself and them rather than be captured. The only “austere” will be in his funeral..if they can find what few scraps of that homicidal jihadi are left. Im actually glad he blew himself up….he will have a lot of time to enjoy the… Read more »

Hitler was a troubled war vet who committed suicide. Obviously WWII was a cry for help!

Just watching Piglousy’s rubber face melting and eyes bugging out while pitching a hissy fit about not knowing ahead of time was quite impressive. I actually think if someone threw a bucket of water over her she really would dissolve into a puddle of goo.