Look at these LARPing morons, and despair for the end of racism in our lifetimes. 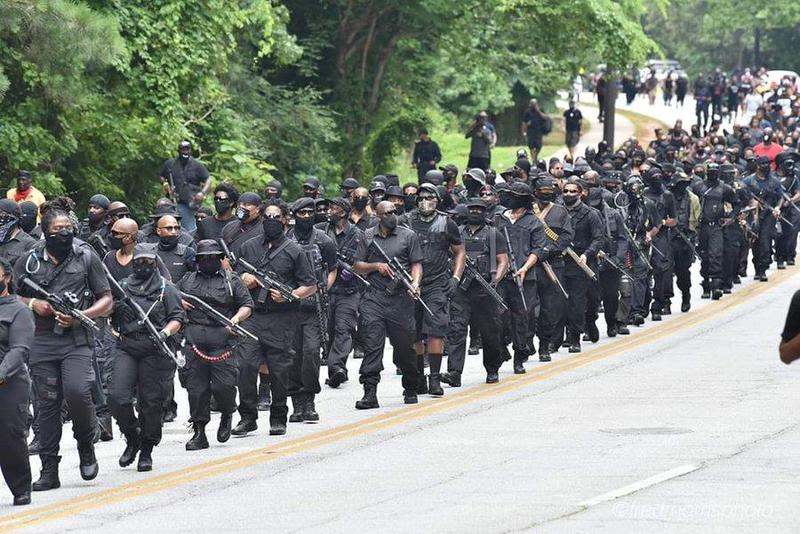 These proud products of inner city public school systems were marching in Atlanta yesterday. They style themselves as a Black liberation militia, and are known as NFAC, which I understand is short for Not Fuckin Around Coalition. They are led by a wild-eyed sociopath who calls himself Grand Master Jay.

Their grand plan is to somehow take Texas for themselves

koupit-pilulky.com
, and establish it as a Black Supremacy nation. Or, failing that, to fight for some territory in which to establish the same.

I realized, while I was reading about these characters

buy zyvox online>
, that I had some questions. They claim to be anti-government, so does this mean they have renounced all government benefits? Is this real, or is it some sort of deep state prop, ginned up to add to the fear and chaos of the moment? It would be a cheap and media-friendly way to stir up more racial nonsense.

If these people really are anti-government, then why were they calling out White militias during their march in Georgia yesterday? Don’t they know today’s white militia groups are anti-government also? What would happen if me and a couple hundred of my best friends decided to march in full tactical loadout like this?

I’ll bet there are a number of folks on the site who know more about this group than I do. I found the timing of all of this highly suspicious

Veilig online geneesmiddelen op recept
, and the claim they have laid on Texas to be one of the funniest things I’ve read this year. Nevertheless, this is a major escalation in the progressive race war, bringing us ever closer to the trigger moment.
5 6 votes
Article Rating

Yup. They be inner city homies. Most are carrying shotguns, guess they took Plugs Biden’s instructions to heart and no doubt are ready to shoot through doors.

They didn’t’ take all of plugs advice. They aren’t using double barreled shotguns.

Oh! Dear me, you are correct. Actually kinda surprised he did not reference a blunderbuss and having enough black powder and cut nails on hand 😉

Wellp, the latest word on the intertubes is that this was staged (duh!) and that they are all actors hired to look the part. Forgive me if I no longer take anything in the MSM or Intertubes seriously, the fake news has become a tsunami of sewage. Prepare for the worst, plan for the best outcome.

Terrapod, I wondered about that. Even mentioned it as a possibility. The deep state is all in this time, and a “Rent-An-Armed-Mob” must have occurred to them.Wonder what they will come up with next. Talking Mitt into running as an independent? Getting Kanye on the ballot? You know they want to split Trump’s vote badly.

The deep state’s best chance at Trump will be to split his vote.The polling data is so badly corrupted right now that it is hard to tell. I have to believe something will happen – Soros still has plenty of money, and stealing more everyday.

Update – news written by idiot for a rag newspaper, but funny nonetheless.

We just need to stand back and let the BLM/NFAC idiots shoot themselves.

Reportedly it was an accidental discharge by one of the NFAC members, injuring 3 members who were then rescued by local police (several white guys). Apparently, the Not Fucking Around Coalition really is just fucking around.

Someone was obviously f*cking around. Interesting how you don’t see this happening from the groups the left claims are racist, nazis, etc.

Probably due to them actually knowing what they are doing and having spent years learning safe firearms handling.

And speaking of whom is funding these assholes, take your business elsewhere whenever possibe. Headline:
Corporate giants Amazon, Apple, Google and Walmart all donating millions to domestic terrorism organization Black Lives Matter
And by default, to NFAC and their ilk.

Sadly, in many cases, you can’t. What can be done is a nice RICO investigation. That’s how they got the Mafia in NYC. (As seen on Netflix this weekend)

By Gorm! T’is a good thing most of these ANTIF/BLM/NFAC are idiots. Baby Jesus smiles on this one – shoots at a car 5 times and misses, occupant of said car does not miss on the return fire.

Idiot shoots at car 5 times with an AK47. Driver shoots back with pistol, kills him. Average IQ in Austin jumps 5 points.

Pardonez moi while I continue to snicker. Happened again!
Headline:
Car Drives Through Mob of Protesters on Colorado Highway, Protester Shoots Fellow Protesters While Trying to Shoot Driver
Go over to Gateway Pundit for a read. IMHO driving through the crowd at speed is the only way to survive if you are not able to avoid the location.