LC & IB Jaybear just brought us the unwelcome news that Wild Bill passed away yesterday, March 8th, at the quite respectable age of 90.

Those here who know anything about him at all will probably remember him most from HBO’s masterful Band of Brothers, where he was played very ably by Frank John Hughes.

Enlisting at the age of 15 (his mother helped him by misremembering the exact date of his birth by two years. She was in pain at the time, so really, who can blame her?), he went on to join the paratroops in 1942 after a stint of building Sherman tanks which obviously didn’t quite satisfy his patriotic sense of duty as he waived the exemption that this duty gave him.

He joined the 506th and made his first combat jump on D-Day and proceeded to kick German ass until a German howitzer shell managed to take him out of action in December 1944 during a small skirmish known as the Battle of Bastogne. Prior to this he had earned a reputation for utter hatred of all things German (they’d managed to kill one of his brothers at Monte Cassino) along with the aforementioned complete disregard for personal safety, shooting first and asking questions later. German is a hard language anyway.

He took, among numerous other battles, part in the assault on Brecourt Manor on D-Day where he, along with about a dozen of his brothers in arms, relieved some 50 Germans of their battery of 105mm Howitzers along with the lives of quite a few of them. That battle later became a textbook example of how to take a superior position when vastly outnumbered.

Another characteristic of Wild Bill was his attachment to his unit and his comrades. When sent back for R&R after having been shot in the leg, he went AWOL to get back to Easy Company, disguising his cast by painting it black. Most likely he was found out by being the only GI in Europe with a boot that appeared to fit. When caught, he didn’t offer up any apologies, noting merely that they could try all they want, but he’d keep going AWOL until he was with his unit again.

The hospital relented and sent him back, just in time for the Battle of Bastogne in December of 1944 and it was at Foy that his career killing Germans finally came to an end as he, once again completely heedless of his own safety, went to haul his buddy Joe Toye back to cover after the latter had lost his leg under a heavy barrage of artillery. Wild Bill lost his own leg in the attempt and Germans up and down the line must have heaved a sigh of relief as he was sent back behind the lines for good.

R.I.P. Wild Bill. The world is a lesser place for your passing, but a better one because you ever lived. 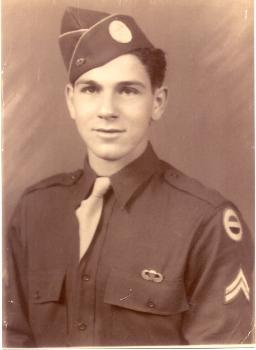 I wish we were still worthy of such men, and that we will be again someday.

The world is a lesser place for your passing, but a better one because you ever lived.

I wish we were still worthy of such men, and that we will be again someday.

“I had no feelin’s. My feelin’s was for my brother who was killed. And I swore I was gonna kill every damn German I came across. That’s when I got the nickname Wild Bill, ‘cuz I did an awful lot of killin’ on D-Day.” …In unrelated news, Heaven is experiencing a traffic jam, as they try to figure out how… Read more »

With 100 more of his kind we could storm that pesthole called Washington D.C. and wipe them out… *all* of them!
(sad face)