A Puppy in Every Pot, a Volt in Every Garage 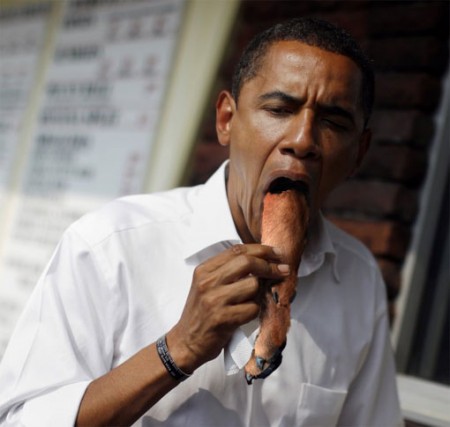 Obama 2012: If you LIKE your dog, you can EAT your dog! (And I have some pretty fabulous recipes too!)

A survey conducted for the Imperial News Agency revealed that news of Obama’s alleged dog-eating habits have an increasing number of voters feeling, as one respondent put it, “disgusted and nauseated.” The general feeling among the survey’s respondents was that about 96% felt that it was simply un-American to even consider eating man’s best friend, much less talking about it in your memoirs.

Similarly, the survey revealed that more and more voters are concerned about allegations about the president’s allegiance, based on his attendance as a young man in a muslim madrassah, the muslim faith being associated with almost every single terrorist attack on the American homeland. Some say that maybe this compromises his decisions in international matters, and some groups even express concerns that there might be a link between his early formative years and the recent surge among fundamentalist islamist supporters in the middle east.

Obviously, all of the above is nothing but the Imperial News Agency reporting the facts. We are a completely unbiased, objective news reporting service and anybody who might suggest otherwise is a dirty, filthy, crazy bastard deluding himself about “vast conspiracies” and the like.

(Are you beginning to see, my fellow American conservatives, how this game is SUPPOSED to be played (minus the last paragraph which is too obvious)? Amateurs. If you want to beat the enemy, you have to think like the enemy)

In a new survey conducte by the Imperial News Agency, conservationists and animal rights activists are showing increasing concern over President Obamas apparent lack of concern for animal rights. An anonymous source within PETA references the following passage from President Obamas Memoir “Dreams From My Father: With Lolo, I learned how to eat small green chill peppers raw with dinner… Read more »

What do you call a Kenyan with five dogs? A Rancher. Obama’s favorite cookbook, Ten Ways to Wok Your Dog. A new meaning to ‘wag the dog’ theory. Now I know why they call him Barky Obama. Let me get this straight: Moochelle? Is haranguing us? ON WHAT WE EAT?!!!! And Romney’s people need to remind voters that the Obamas… Read more »

“I should have suspected something when Obama stopped by Glenn Reynolds’s house for drinks.”

And does Obama’s chef says: “How much is that doggie in the window?”

Dog gone you guys are funny

If you can’t finish your dog, you can take home the remains in a doggie bag. BTW, the Indonesians are horrified by this revelation. Apparently Indonesian Moslem city folks won’t even touch a dog. As for the tribesmen who do … they were suitably horrified when they learned that Obama had recently screwed the pooch. I meant that figuratively of… Read more »

If the image doesn’t work, here it is.

Says it all right there.

I would never actually accuse President Obama of having sex with animals.

Have you seen Michelle Antoinette lately?

,This is definetley a good blow on bamas fragile ego. American in many instances rank their pets as “family” if not flat out part of “the kids”, admitting to eating dog (our fav pet) while not in a survival situation, is subconsciously triggering a repellant response. Couple this with the fact that those kumbayah. Lily fucking white 52rs are looking… Read more »

Mama always said to be on your guard because it’s a jugears eat dog world.

I think I remember Moochelle telling Ear Leader, when they were told about so many millions of America’s citizens being on food stamps and not being able to afford arugula, “Let them eat dog!”

Pups! We are all in extreme danger! I found this over at the Peoples Cube!
Check way on down the page, nearly at the bottom! Fortunately, one of Red Square’s readers found this and passed it on to him, and I’m passing it on to the rest of the Rotties. And, DJ thought we were paranoid about Ear Leader!

Let me get this straight:
Moochelle?
Is haranguing us?
ON WHAT WE EAT?!!!!

Barry – Don’t play with your food!

All y’all need to see this: THIS is the industry that Hussein and his loathesome family were participating in. These photos will break your heart, and enrage you, if you give a damn about our Best Friends. Starving, exhausted and crammed into tiny cages, they were just hours away from being killed for restaurants. These shocking pictures were taken after… Read more »

Considering what Liberals do to babies…

Are you SURE ?? What species IS Moochelle the Wookiee, anyway ??? Kristopher, LC says: If you can’t finish your dog, you can take home the remains in a doggie bag. BTW, the Indonesians are horrified by this revelation. Apparently Indonesian Moslem city folks won’t even touch a dog. As for the tribesmen who do … they were suitably horrified… Read more »

since volts have a bad habit of catching on fire do not put it in your garage as for food i will eat anything that does not eat me first..