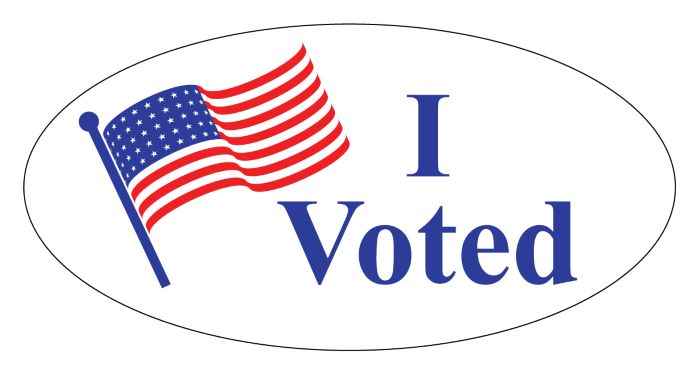 …and you’d better do the same. There’s still time, right up until tonight.

And kindly don’t give His Imperial Majesty any of the “but it won’t matter anyway! They’ll STEEEEAAAAAL it, *sniffle*” nonsense either.

Sure, they might. It’s not like they haven’t done it before, in 2020 they did it so blatantly obviously that it was visible from space, but that’s not the point. If they do, they do, and they “win”. But if we DON’T vote, then they won’t even have to TRY and they STILL win. And if they don’t have to try, all of the very, very watchful eyes staring at ballot boxes this year will see absolutely nothing because no stuffing of them will be necessary.

At least make them try. If there’s one thing we teach every young recruit in the Legions, it’s that it’s damnably hard to chop your enemy’s head off if you don’t get him to stick his neck out far enough that you can get a good swing on it.

So you can either vote and make them work for it, or you can curl up in the fetal position with your thumb in your mouth and cry about it and then live with the knowledge that they didn’t even have to cheat this time, because you gave it to them for free.

Finally, and this is something we learned as a young buck getting fitted for our first toga, if you don’t vote, then you’ve abandoned your right to complain until the next election. No matter what follows, you’ll be kindly asked to sit down and shut the fuck up because “daddy, what did YOU do to turn the last election.”

“I couldn’t be arsed because they’d win anyway” isn’t going to convince anybody to listen to you.

Adolf Hitler: “I Wasn’t Aware That My Rhetoric About Jews Being the Source of Our Misery Would Lead to the Final Solution, So Can’t We Just Move On?

I would say that I voted early today and often, but then I am not a member of the D party, so it was just the early part.

It’s election day! Get out there and vote for the two-legged vermin of your choice! (Or vote Republican)

I voted this morning on the way to work. I was the 516 ballot cast in my ward and this was about an hour after the polls opened. I was talking with the young woman who handles the office management. (She’s 28), I reminded her to vote and she said she’s never missed an election. I didn’t ask how she… Read more »

This is par for the course

Does anyone else find the “red trickle” a surprise? That is, that the Dems did better than expected? Numerous States are Reporting Voting Machine Malfunctions Republicans are becoming heavily skeptical as reports begin flooding in about Dominion voting machines being “broken,” “down,” and “not warmed up yet” across the county. The Gateway Pundit, along with various other Republican leaning publications… Read more »

I see the Election Denial 2.0 is starting up again. Does anyone else find the “red trickle” a surprise? Nope. Not at all. It was pretty much the mixed bag I expected it to be. That is, that the Dems did better than expected? Better than WHO expected? If you mean the cable news shows you watch or (let me… Read more »

PENNSYLVANIA: Pennsylvania voters reelect Dem lawmaker who died of cancer last month A deceased Democratic official won reelection in Pennsylvania on Tuesday. Yes, really.Democrat Tony DeLuca was the longest-serving member of the Pennsylvania state House of Representatives, serving for nearly 40 years. He died last month at age 85 after battling lymphoma. But that did not stop voters from reelecting… Read more »

You complain about dead people voting, now you complain about dead people winning elections. The dead are people too. LOL Oh wait, you think this is a serious issue. Oops, my bad. PENNSYLVANIA: Pennsylvania voters reelect Dem lawmaker who died of cancer last month My first reaction when I read your headline here was “How bad was the Republican candidate that… Read more »

If you really want to know why candidates / party lose elections, maybe this will help you out a bit: http://nicedoggie.net/wp-content/uploads/2022/11/batshit-insane.png You have to know that much of what Trumpublicans have been pushing for the past six years is not wanted by most of the population. The elections are showing that. Ironically, it is precisely the efforts by you and… Read more »

Firstly, you know nothing about me. I am not a “Trumpublican.” Secondly, you will never convince me that the 2020 election wasn’t fixed. I watched people go to the addresses of ballots in Nevada, and they were empty lots. I watched Pennsylvania overturning its own rules. I watched people show up after the polls closed with boxes of votes. I… Read more »

Firstly, you know nothing about me You are obviously relatively new here. There was a time fifteen to twenty years ago when I would consider this a challenge and you would have ended up with a pizza delivered to your door within about an hour. I would tell you how ridiculously simple it is, but I don’t want to cause… Read more »

Here is my answer to your overly wordy reply. You know I live in NY. You may know my address. But that’s it. I don’t participate in social media. Voting for Trump makes one a “Trumplican?” So voting for Biden makes you a Bidenidiot. As to the election being stolen, just look at what’s coming out now. Pennsylvania broke its own laws to permit illegal mail-in ballots… Read more »