Biden doesnt waste any time lurching to the Left

He will rejoin the Paris agreement.

If carried out, the energy regulations agreed to in Paris by the Obama administration would destroy hundreds of thousands of jobs, harm American manufacturing, and destroy $2.5 trillion in gross domestic product by the year 2035.

So called “climate change”? You mean the supposed catastrophe theories that cant be proven for 100 years?

Ottmar Edenhofer, a recent co-chair of the U.N.s IPCC Working Group III, affirmed the scheme: “One has to free oneself from the illusion that international climate policy is environmental policy…We redistribute de facto the world’s wealth by climate policy.”

So the first thing Biden does is run to suck the UN’s dick, then hand over loads of US taxpayer dollars for a supposed “emergency” that doesnt exist.

Rejoin the WHO and start handing THEM money. Oh you mean the same WHO that sent this?

Tweet
See new Tweets
Conversation
World Health Organization (WHO)
@WHO
Preliminary investigations conducted by the Chinese authorities have found no clear evidence of human-to-human transmission of the novel #coronavirus (2019-nCoV) identified in #Wuhan, #ChinaFlag of China.

This didnt age well, did it?

But please feel free to tell me they didnt send it, the link is a lie or a made up delusion….that IS, by the way, why they call it the Chinkin Pox, the Chinese Lung Pox, the Kung Flu…..is anyone else also aware that this is the SECOND virus outbreak starting in China?

, but they were ordered to stop tests, destroy samples and suppress the news, a Chinese media outlet has revealed.

At the end of January, WHO Director-General Tedros Adhanom Ghebreyesus met Chinese President Xi Jinping in Beijing and commended the country’s efforts to control the outbreak. He also praised the Communist Party’s top leadership for its “openness to sharing information” about the virus and its spread, even though Chinese officials in Wuhan — where COVID-19 cases first emerged — were cracking down on people for “spreading rumors” about the disease.

Uh huh…oh and last but DEFINITELY not least

“In the first 100 days of my administration, no one…no one will be deported at all. From that point on, the only deportations that will take place are the commissions of felonies in the United States of America.

Oh well America….you voted for this socialist POS..now you wear it.

Oh well America….you voted for this socialist POS..now you wear it.

No we didn’t. The Progressive Liberal Democratic CommuNazis stole the election. The Greatest President of the 21st Century is currently fighting back against the forces of evil and darkness.

And if those scum think that throwing 10’s of millions out of work will not have any effect? 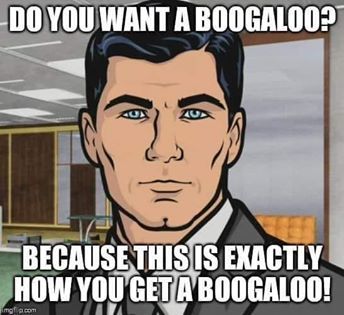