A Day That Changed My Life 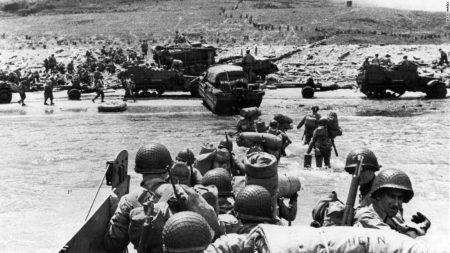 75 years ago yesterday, an armada set out from the south of England to end the occupation of Western Europe and defeat the monster that was Nazi Germany.

It was not a particularly good day for it, in fact it was so unsuited for the purpose that SHAEF had considered calling the whole thing off and the Germans were on low standby. Rommel himself, one of the few members of German high command who actually had an accurate idea of what was going to happen, had decided that it was so unlikely that the invasion would come at that point that he’d set out to celebrate his wife’s birthday in Germany.

But it wasn’t called off, and so the beginning of the end of 4 years of Nazi occupation of Western Europe began.

Side by side, soldiers from all of the Western allied nations fought a bloody battle against fierce and determined German defenses, inching their way inland suffering horrendous losses and, at the end of that day, June 6, 1944, the bridgehead was secured. A bridgehead that would prove the cure for the cancer of a Nazi occupation that had lasted for four damnable years.

I will not go into detail about the countless acts of sacrifice and heroism on that momentous day, it has been described much better by others, but I will talk about it from a more personal angle. What it meant for me, my family, and millions of other Europeans.

It has been pointed out numerous times over the years that the war was already won at that point, that Adolf’s monstrous “Thousand Year Reich” was already on the way out, and it has even been suggested by some that the D-Day invasion was really nothing but the “icing on the cake”, that the Soviet Union had borne all the heavy lifting already and that the Wehrmacht was a defeated shell of its former self.

None of this is factually untrue. Even if D-Day had never happened, Nazi Germany would have been defeated. They were done. They had been on the retreat since the winter of ’42, and the question on the minds of Europeans was no longer “if” the occupation would ever be over, it was “when” it would be over.

And, more importantly from the perspective of myself and the millions of Europeans I mentioned before, it was “who will be our liberators?”

Had the U.S., Britain, and all of the thousands of men from other allied nations NOT stormed those shores on that day, our “liberators” would have been advancing under a red banner and I, as well as all of those others, would have grown up on the wrong side of the Iron Curtain.

That is not insignificant, certainly not from my personal point of view. What use is liberation from one kind of totalitarian fascist regime if it’s simply replaced with occupation by another equally totalitarian regime?

Ask a Pole or a Czech.

And prepare for an earful, especially if it’s a Pole you’re asking. They had been in the unique position of having watched the West guarantee them, then sit back and do nothing other than declare war while they were being torn apart by Germany, then utterly ignored when the Soviets joined the fun of tearing them up, only to be left in the claws of Stalin when the whole show was over.

Yes, I know, realpolitik and the art of the possible vs. what you want, and I fully understand it, but it’s cold comfort to a nation who ended up under fascist occupation from 1939 to 1991.

My native country escaped that fate. Narrowly. As a matter of fact, the Soviets ended up occupying our easternmost island until April 5, 1946, and were only made to hand it back because the main part of the country fell under the Western Zone.

Talk about dodging a bullet.

And we only dodged that bullet because those immeasurably brave young men got onto those landing crafts, into those planes and onto those warships on that crappy, rainy, windy day and decided that, what the hell, today’s the day we’re going to do it!

That is a debt that I cannot possibly repay, no matter how long I live. And this is not ancient history to me either, as it may seem to my own sons today. That invasion, that glorious, bloody day, took place a mere couple of decades before I was born.

And there was not a day during the subsequent long Cold War that I did experience that I didn’t, having read of yet another communist atrocity committed on the other side of the Iron Curtain, look to the West and remembered all of those young men who fought and died on that day.

Those wonderful young men who died so that I might read about communist tyranny rather than experience it on my own body every single day of my life.

Had it not been for them, my life would most certainly not have been the one I’ve led. I might not even have existed.

Talk about a debt that can never truly be repaid.

And today I am honored and privileged beyond words to call myself an adopted son of one of the nations that brought all of that about. I only wish that I could go back in time, board one of those landing craft and truly earn it.

I’m glad at least YOU understand. Now if we could get the rest of Western Europe to understand what they (the Greatest Generation, and don’t even try to debate that) did for their countries. To France especially, and the rest of the ungrateful bastards, those folks just said, “You’re welcome.” Then they went home and took up trying to live… Read more »

Now if we could get the rest of Western Europe to understand what they (the Greatest Generation, and don’t even try to debate that) did for their countries. Oh they do. The huge, silent majority do. And the problem of the illiterati is that they still haven’t realized that silence doesn’t equal consent. It just means that the ones with… Read more »