So apparently the band at the White House was playing show tunes, and this got Ace Reporter Maggie Haberman all verklempt: 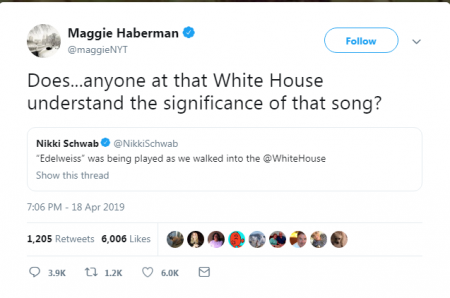 Maggie, you’re as dumb as a sack of nail clippings. “Edelweiss” was written in 1959 by the well-known duo Rodgers and Hammerstein and not, as you seem to think, by Julius Streicher of Der Stürmer some 20+ years earlier.

It’s from the musical “The Sound of Music” and not, as you seem to believe, the anthem of the Third Reich, which had collapsed 14 years prior to the writing of the song.

In the musical, it was meant as a protest song against the Anschluss of Austria, which took place 21 years prior to the song being written. Now, as you probably don’t know, the Austrians who were against the Anschluss were not Nazis either. They were, as a matter of fact, quite the opposite.

In much the same way that you, Maggie, are the exact opposite of even remotely competent.

So unless you’re suggesting that President Trump is quietly stirring up popular sentiment against an event that took place 81 years ago, we are quite confident that you don’t have the foggiest notion of what the significance of that song is.

Which comes as absolutely no surprise to anybody who has ever been subjected to your Guaranteed 100% Fact Free “reporting” for more than three seconds.

You are, beyond a doubt, one of the dimmest bulbs among the employees of the so-called MSM and that, ma’am, is quite an achievement indeed.

Though not necessarily one to be particularly proud of.

TDS journalist out in the mid day sun.

I’ve seen enough Weapons Grade Stoopid™ from the leftards to be surprised by anything they do except show the ability to think.