OK, so back to politics:

So Ilhan “Lannister” Omar, the cutest lil’ Nazi in the Democrat Freshman Class of 2018, recently referred to 9/11 as “some people did something”.

Which, apparently, is current Minnesotan for “a bunch of degenerate, subhuman, Islamofascist animals murdered 3,000 innocent people”, but we digress. 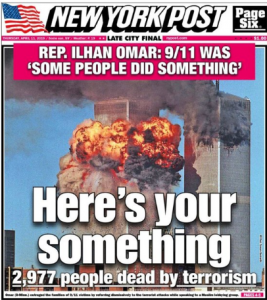 His Imperial Majesty could feel the burn from where he’s sitting. Brilliant!

“Some people did something.”

Well, we all know who little Ilhan meant by “some people”, don’t we? After all, Nazis gonna Nazi. That’s bad enough, but to refer to the most murderous attack on the United States ever as “something”…

Thanks a fucking million, Minnesota. What’s “Minnesota” in the original German?

The ones who DID vote for her, on the other hand: We’re deeply ashamed that you were ever our countrymen. As a matter of fact, you lost the right to be called that when you voted for that disgusting little incestuous Nazi whore.

If saying that makes us a racist, then we’re a racist and fucking proud of it.

She’s a perfect example of why our nation should stop, once and for all, wasting precious American lives and resources intervening in turd world shitholes in order to save the inbred degenerates from themselves. Or, at the very least, stop importing the dregs of humanity once we’re done.

To think that we lost good American lives saving that Nazi sow from the cesspool she was wallowing in so she could come here and defile our nation with her foul presence (and the fact that at least one of those lost was a Jew only makes it worse) makes us absolutely furious.

And to think that she is now a member of Congress…

UPDATE: We suppose we should post her response to criticism of her diminishing the worst attack on the U.S. in history: 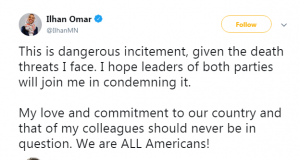 Condemning it? No, we should praise it and repeat it until we’re positively exhausted from doing so. “Death threats?” Leaving aside that we don’t believe a word coming out of your whore mouth for a second, that’s still a damn sight less than what you faced when you were living in the shithole that you obviously still feel more allegiance to than the one that generously invited you in and let you run for Congress.

If you were to look up “ingratitude” in a dictionary, provided that you first learned how to read, you’d find your own picture staring at you.

No. You are not. Not even remotely. We’d appreciate if you would, in the future, refrain from using the first person plural.

You are not, you never were, and we find it extremely doubtful that you ever will be.

We know that WE certainly wouldn’t want to belong to a club of which you were a member.

Take your racist, anti-Semitic, un-American bullshit, pack your bags and get the fuck back to the filthy midden that you spawned in.

Best wash your hands. I think you took the words off my tongue and expanded on them as only you can. I became a “love it or leave it” person a long time ago and she clearly doesn’t love it, so go on. Get out. It’s probably easier to leave than to enter, though I’ve never tried either.

Exactly! We are dealing with the “hate it and change it” crowd when the left and Muslims are involved (redundant I know). The question then becomes how to remove these destructive influences from our nation. In the case of Muslims it would be to 1) not allow immigrant entry and 2) encourage those now here to leave. As to the… Read more »