Well, not exactly, but at least they admit to making shit up, Fake News, you know, followed by the usual litany of shitlib excuses, justifications and deflections.

Remember this photo, illustrating the devastating effects of Glowbull Wormening: 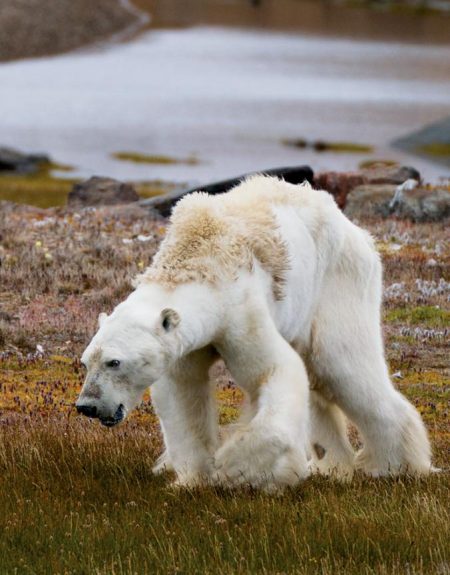 That poor polar bear. Starving to death due to the absence of its customary, essential diet of frozen water.

When Paul posted the video on Instagram, he wrote, “This is what starvation looks like.” He pointed out that scientists suspect polar bears will be driven to extinction in the next century. He wondered whether the global population of 25,000 polar bears would die the way this bear was dying. He urged people to do everything they could to reduce their carbon footprint and prevent this from happening. But he did not say that this particular bear was killed by climate change.

Except by implication, of course. Can anybody with an IQ higher than that of a ficus explain to us why he would include “reducing carbon footprints to prevent this (the emaciated bear) from happening” if he wasn’t tying it directly to Glowbull Wormening and, moreover, can that same somebody explain to us how his “clever”juxtaposition of that picture with a screed about “reducing carbon footprints to prevent this from happening” can be taken to mean anything OTHER than “carbon footprint is murdering polar bears!”?

Please. We’ve got a full platoon of the Imperial Stormtroopers on phone duty, awaiting your call. (Needless to say, it wasn’t exactly hard to find volunteers for that particular detail. If we hadn’t stopped accepting new ones within 4 seconds, we’d have had a full Army Corps sitting around staring at their phones in between emptying the Imperial Liquor Storage facilities).

National Geographic picked up the video and added subtitles. It became the most viewed video on National Geographic’s website—ever. News organizations around the world ran stories about it; social media exploded with opinions about it. We estimate that an astonishing 2.5 billion people were reached by our footage.

“National Geographic… 2.5 billion people lied to since, well, not that long ago.”

You sound as if you’re almost proud. Which you most likely are.

We find your words… unconvincing. Then again, we most certainly have an IQ well above that of a ficus.

We had sent a “gut-wrenching” image out into the world. We probably shouldn’t have been surprised that people didn’t pick up on the nuances we tried to send with it.

Perhaps we made a mistake in not telling the full story—that we were looking for a picture that foretold the future and that we didn’t know what had happened to this particular polar bear.

What? You mean including all of the facts? Nope, not a mistake. Not in this day and age. You’d have been immediately been found guilty of committing an act of journalism by the People’s Court of Social Media and you would most definitely have found yourselves unemployable for life. Still not an excuse for lying through your teeth for personal gain, but with your obvious motives in mind it was surely not a “mistake”.

Also, “mistakes” are commonly involuntary. Your “mistake” manifestly was not, in any way, involuntary.

You had an agenda and a picture to shop around, and you did exactly that. Damn the consequences.

Your mommas must be so very proud.

Yummy polar bears…tastes like condor.
Should eat ’em, all fatted up, though.
Does an LLL going through a P-bear guts effect the flavor much?
Bears will find them yummy, I think.
Problem solved! Fewer Libs, fatter P-bears.
BBQ’s will get really interesting!