“Pour Some Sugar On Me”

Unless you’re in Seattle, because it has become rather too expensive there.

Now that’s some change Seattle-ites can believe in! Especially since “change they can believe in” is the only change they’ll have left if they ever decide to buy a sugary drink again. 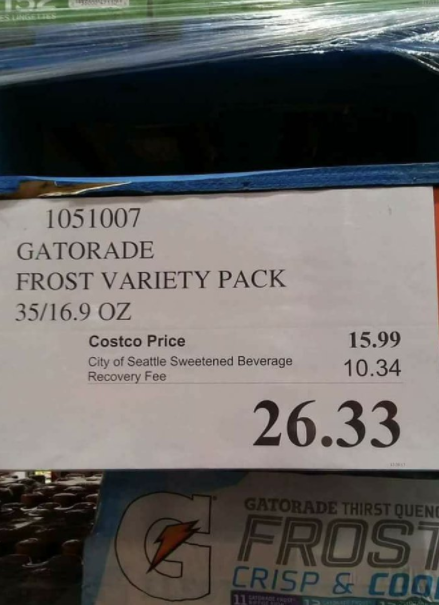 Of course, having as much understanding of market forces and basic economics as a Gender Studies major, the politicians enacting this particular wallet rape are as hilariously stupid as usual:

Seattle officials expect a $15 million boost in the first year. Since this was sold as a health initiative, $2 million of that will expand a city program that gives fruit and vegetable vouchers to low-income families. Of course, only $400,000 will go to actual vouchers; the other $1.6 million stays with the government for “administrative costs.”

Why of course! The natural response of demand to massive increases in price is, why, nothing at all! People will happily go on consuming every bit as much of a good if it costs twice as much! That apparently, is the sum total of what they teach about economics in law school, which is where 99% of politicians come from.

They’re so adorable when they try to think, aren’t they?

Not to mention the internal contradiction in claiming that a new sin tax is to “improve health” while, at the same time, claiming that said sin tax won’t change consumption at all.

You really have to have a degree to be that stupid.

The icing on this particular political cake of idiocy is, of course, that only 20% of this projected (and wholly illusory) windfall will actually go to anything remotely useful, while 80% of it will slide into the pockets of a new horde of pointless wastes of skin, the blood sucking class of parasites known as “bureaucrats”.

So, business as usual, we guess.

Good luck with your new vast mounds of cash, because we’re absolutely certain that in no way will this result in citizens of Seattle either quitting sugary drinks or driving all the way outside of city limits to purchase them.

That could never happen!

So would this be a good time to set up a store selling nothing but soda’s and other items just outside the Seattle tax zone?

Yup, just like fireworks sales, banned in Michigan, freely available over the state line in Indiana. But wait! This is Seattle…. the city geniuses will now hire a city limits police forces, fully armed with Tactical Black(TM) uniforms to inspect every car and truck entering the city limits

Terrapod @ #: the city geniuses will now hire a city limits police forces, fully armed with Tactical Black(TM) uniforms to inspect every car and truck entering the city limits You kid, but up here in the Great State of New Hampshire, there have been many occasions when the People’s Democratic Republic of Taxachusetts has sent State police into NH… Read more »

Funny part is that the Aussie government discussed this..and said no. But, the coalition insists it’s taking the required action to tackle the challenge of obesity and won’t sweeten to making a deal that taxes sugary beverages. “We do not support a new tax on sugar to address this issue,” a spokesman for Health Minister Greg Hunt said. “Unlike the… Read more »

You really have to have a degree to be that stupid.

Not only is she a Socialist from India, she is extraordinarily stupid — even for a socialist.

Dude, please. Socialism IS, in and of itself, the stupidest construct ever foist upon humanity. It simply WILL NOT WORK. But you know this.