Oh yes, we remember their outrage, OUTRAGE about that T-shirt. First when we launched it, and then, much more hysterically, during the election.

This nation is rapidly reaching the point where they’ll end up outraged at the end of a rope while their feet kick the air.

It’s an outcome that many on the right seem to be aching for. Though speakers of all ideologies regularly appear at colleges without incident, a few widely publicized disruptions feed a narrative of leftist enclaves of millennial snowflakes refusing to abide ideas they disagree with. From the president to Fox News, right-wing voices wail, through their megaphones, about how put upon they are, like soccer players collapsing to the turf and writhing in pretend agony.[Emphasis ours – Emp.M.] 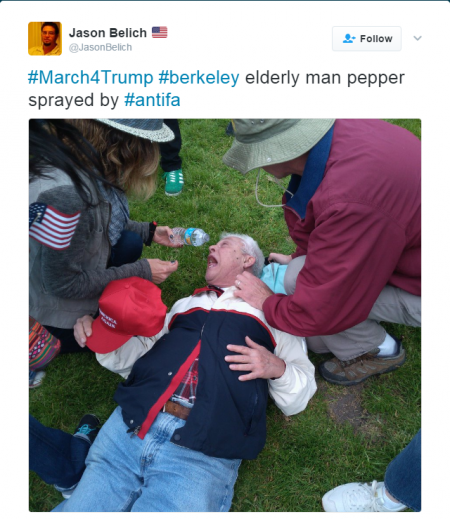 That kind of “pretend agony”, you disgusting, filthy, sub-human sacks of shit?

Want to tell that to gramps yourself? Maybe invite his entire extended family so you can pontificate to the lot of them how grampy is just a big, whiny, fake pretender with a victim complex?

Hey, why not make a national tour of it? Please let us know when you come to Texas. We’ll give you a proper welcome. Already have a nice tree scoped out that will do nicely.

Fuck you, you fetid piles of excrement.

Clock is ticking. Can you hear it?

It’s getting louder and louder.

Misha, for shame. You need to be more inclusive. Lampposts work every bit as well as trees.

VonZorch Imperial Researcher says: Misha, for shame. You need to be more inclusive. Lampposts work every bit as well as trees. True. It’s just I thought that it could be our last concession to the Prozis’ alleged love of all things natural to not let them dangle from unnatural, man-made lampposts. Also, their swinging carcasses might ruin the lighting and… Read more »

Emperor Misha I @ #:
Let them hug one last tree before they swing from it. Misha, ever the romantic.

Let them hug one last tree before they swing from it. Misha, ever the romantic.

Yet people keep refusing to believe me when I tell them that I’m really just a big, warm, fuzzy cuddle-bear. Go figure!

Remember seeing those scenes where the bodies lined the approaching highway to a city for miles? Crucified or hung, saw both. Would that make a sufficient wake up call? One doesn’t know whether to seal the bodies in plastic to make them last as a warning, or let the aroma be part of the reminder. You would only have but… Read more »