Those Were Some Bitchin’ Yoga Routines!

So, Trump jokingly suggests that the Russians, in case they happen to have also hacked the 30,000 or so emails that her FBI lapdog Comey couldn’t quite find, release those as well. To which the increasingly deranged Prozi Campaign responds: 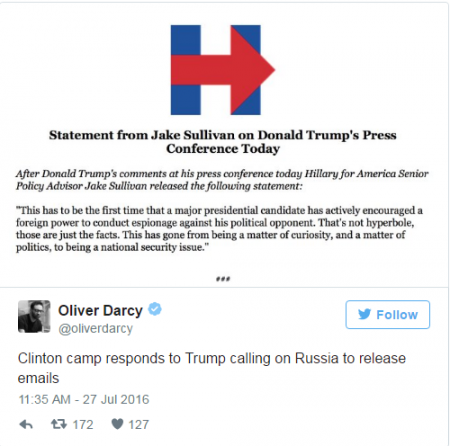 Erm… OK. So those same yoga routines, wedding plans and harmless “private” emails (those were Cankles’ own words during the sham “investigation”, not ours) are now a national security issue, according to the Cankles Campaign?

Or maybe they weren’t just all “yoga routines”. You decide.

The World’s Smarterest Womyn sure walked right into that one as well, didn’t she?

I noticed the liberofascist Twits dropped their “treason” meme in a hurry, Sire, after being inundated by this very point. Meanwhile, The Donald stole the whole show from them once again.

I can’t wait for the debates. Trump lands one hay-maker after another and Cankles starts coughing uncontrollably, then she leaves the stage to change her depends.

I guess ‘Bush did it…” is passe. Last night’s Dem self-admiration group fisk was all about ‘The Donald™’ bashing.

i want to see her throw another one of those seizures while live on national TV, where it can’t be ignored…

i want to see her throw another one of those seizures while live on national TV, where it can’t be ignored…

Somebody needs to remind Jake(ass) Sullivan that the “espionage” was committed long before Trump made a statement on the topic.

Check out this short video – James O’Keefe mega-trolls the enraged Berniebots as a Hitlery fanatic.

Shouldn’t that be “Free! No limit, take all you want.

Before or after she strokes out?

Before or after she strokes out?

I’m confused! (It’s okay, I’m old, I’m used to it.) Hillary commits 30,000 security breaches, any one of which would have seen me sent to Leavenworth, and it’s no big deal, because it didn’t compromise national security. But when Trump asks the Russians to release them (which we all know damned good-and-well they have because everybody except my mother hacked… Read more »

Spook, ya ain’t confused, you’re just not part of the “elite” like cankles or bubba clintoon, obongo or mooch-elle, etc. I resigned my job as a contractor and told my FSO to cancel my clearance (same one she and obongo had, probably the same one you had) and told them that I could never work for a criminal organization. I… Read more »

You know she wasn’t giving those emails away.

Russia paid good money for them. And China, and Iran, and the Saudis, and any other evil regime.

I have to say she’s NEVER looked better!

You know she wasn’t giving those emails away.

Yer’ on to sumptin’ there, partner

Think of all of those servers, and their b/u, and their redundancy. Wow! Copies for everyone and in fifteen languages.