We have to admit, this election season is just getting funnier and funnier:

The wheels are coming off the Hillary Clinton campaign. The White House is taking shots at her, the F.B.I. has expanded its investigation into her use of a private email server, she lost the endorsement of MoveOn.org, and now a self-avowed socialist is up 14 points against the Bungler of Benghazi in New Hampshire.

In this same poll two months ago, Sanders was ahead by just +3 points, 48% to 45%. Sanders is also surging in Iowa. What was a double-digit deficit just two weeks ago, is now within the margin of error. The latest poll out of Iowa, released today, has Sanders up +5%, 49% – 44%. Last month, in this same poll, she was up +11. Should Sanders win both New Hampshire and Iowa, Hillary is going to live through her worst nightmare for a second time.

Imagine what Sanders, that senile old avowed socialist, might achieve if he actually started trying to win the Prozi Party nomination!

Hmmm… Campaign slogans… We know! How about:

Hillary!™ SO inevitable, even refusing to fight against her, you can’t lose! 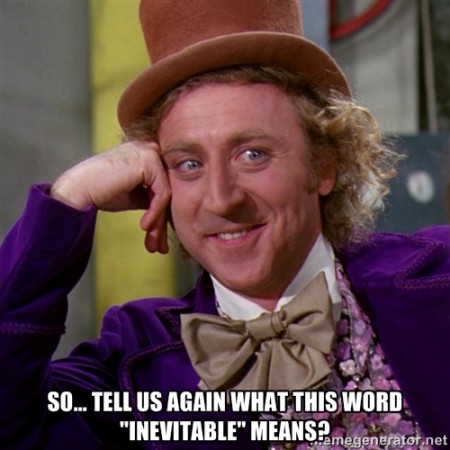 In other news, Princess Precious Perfect, in her last insufferable drone of a SOTU speech, said:

“As we speak, Iran has rolled back its nuclear program, shipped out its uranium stockpile, and the world has avoided another war.”

Hmmm… We could have sworn we’d heard that one before.

Not mentioned by Princess Precious Perfect while she was busy slobbering all over herself: 2 U.S. ships and 10 U.S. sailors detained by Princess Clusterfuck’s new “partners in peace.”

OK, this deja vu is making us dizzy!

Achievement unlocked, Princess! You have now officially surpassed the previous Master of Clusterfucks!

News is out that the Americans and the boats have been released.

Ted Cruz was at my gun range yesterday and I DIDN’T KNOW IT!!!

I did something useful when King Putt gave his final “I love me” speech. I read a book on the battle of Jutland

angrywebmaster says: News is out that the Americans and the boats have been released. Yeah. After Kerry had groveled and thanked the Mullah Mooselimbs for “rescuing our sailors in distress”, the Mooselimb animals had coerced a U.S. sailor into apologizing for being in “distress” and, presumably having inconvenienced Hussein’s new “allies” by forcing them to “rescue” them (because heaven knows,… Read more »

Emperor Misha I @ #: I saw that after I posted here. Personally, I think Obama is actually working for the Iranians, or at least Jarrett is. It’s the only reason I can think of for the outright surrender by Il Douche to Islam. I was watching fax last night and one of the panels was saying that Obama’s morphing… Read more »