It seems to be all the rage these days. Free Range.

Free Range Chicken, the cluckers get to roam around a pristine emerald green grassy field under an azure blue sky, whiling away their days bathed in lemon yellow sunshine. Right up until they are nice and plump….then  Ol’ Farmer Brown whacks their head off with an axe (humanly of course!!) and sits down to enjoy his corn-cob pipe for a spell while the body finally figures out it’s dead and has the decency to lay down in eternal rest. Well not really – but hey “Free Range”  it sounds so much better than the “poultry industry” on a package of Tyson Chicken breasts – no?

Then of course there’s “free range” beef, turkey, bacon on the hoof, and “farm raised” fishes too!! Kinder and Gentler for the masses . America – now more blissfully ignorant of where their dinners are coming from.

Free Range. What a nice touchy feeling sounding set of words. There’s even “Free Range Kids” now!! So what happens when your brain dead of an excuse of a Mayor decides that she should apply that same sort of nuanced and enlightened philosophy to you the oh so gentle tax payer? 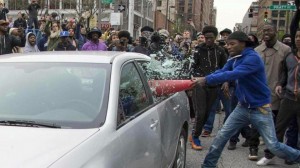 Stephani Rawlings – Blake the mayor of Baltimore had this to say IRT to the riots and civil unrest plaguing the city since last Saturday:

“Those who wish to destroy – We’ve given them room to do that.”

Free range thugs! How nice! Well maybe not – at least not if you were trapped inside Camden Yards Saturday night as the hood rats attempted to destroy down town Baltimore. Reports in the press say some 15,000 people were stuck inside the stadium due to a “public emergency”.

Think about that for a second. Wrap your head fully around that. UNDERSTAND IT …..You, your family, your best beer drinking pal all headed out to the ball park on a Saturday night to do nothing other than  watch a ball game.It’s a cool spring night, not a cloud in the sky. Perfect night for a baseball game.

And …..3 hours later you are now a virtual  prisoner of the state of MD. All the while the ignorant fucking apes  run amok through Baltimore. With of course, the tacit approval of the Mayor – some dumb ignorant cunt with more politically correct hyphens in her titles and names than a thesaurus, who decided to give them free range to do whatever they please.

Pissed off yet? I am.

Thanks Stephanie!! Thanks Al $harpton, Je$$ Jack$on, and Barak. You helped fucking raise that!

Of course the old – “give them an inch and they will take a mile” saw has to be mentioned here.

This is the result. The Crips, The Bloods and Nation of Islam quit killing each other long enough to “band together” and – I guess go “kill da’ white man and the pigs” or some equally stupid shit. One utterly ignorant FB hoodlum cheering squad member …. actually said “Shi’ jus’ got real yo!” (sic) 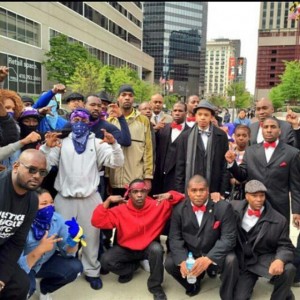 Yeah, it got real okay. Real dangerous that is, you fucking mouth breathing  idiot.

So whats all the uproar in the once fair city of Baltimore about ? A 25 Year old Black Male was arrested and died in Police Custody. Freddie Gray. He actually died 3 days after his arrest. In a hospital. But don’t let that ruin a good narrative of racist cops killing unarmed black people on sight now…. heaven forbid!

I’m sure the narrative from the ignorant cock-holsters and SJW on the left will be “He was a gentle giant – RACISIT! a good boy RACIST! who was getting his life turned around – going to Church RACIST – twice on Sunday !!11!!!1111!!, and oh yeah “RACIST”.

Umm sorry… that particular Elvis has left the building ! His arrest record was immediately brought out on Live Leak

20+ criminal counts reaching back as far as early 2008.Some reports list these counts as involving weed, cocaine, crack and Heroin. He was a drug dealer. That’s what in the public record, God only knows what other shit this idiot was involved with.

This is another “teachable moment” as they say. Tack a moment and Wrap your head around this guy’s life.

For over 6 long years this guy has pissed in and helped to poison the community well, he’s stolen from them, addicted their children, and terrorized those that just want to make a living and live in peace. He’s given nothing back. Nothing but grief that is. You’d think with that sort of proof …the “community” would actually breathe a sigh of relief – But nope the heathens from Nation of Islam and others intent on chaos will riot all the same. Why? Because they WANT to. No other reason.

Need more proof that the hood denizens are spoiling for a fight? 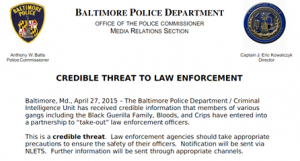 Screen shot of the memo of a credible threat to LEO from the Black Guerrila Family, Bloods, Crips etc.

They want to go to war….I say give it to them. Cordon off the entire city, roll into the place and let it rain lead. Make it look like Fallejauh Part II. You might as well complete the narrative, because this is one argument you just can’t win, so cry havoc and let slip the dogs of war. Do it enough times and these idiots will learn their lessons. Or not. At this point, I imagine a lot of Americans don’t really give a rats ass. We simply don’t care anymore.

Seriously, Fuck Em, they want to turn a once thriving city into West Mogadishu …. By all mean, lets roll. I’m frankly sick to death of hearing how the inner city folk have some reason to bitch endlessly, riot, loot, rape and pillage just because some drug dealing low life punk got his just rewards. Memo to the hood rats….If you brain dead idiots are going to tear your own community apart, at least wait until the cops actually kill someone that wasn’t a deviant drug dealing scumbag, is that two much to ask? Mkay? Just a thought.

Of course the presstitutes always eager to bare their loins for the liberal  MSM cause breathlessly reported his death as “having his spine 80% severed”.

Gruesome, No? Um no, not really. Correct me if I am wrong here, but it’s what happens when some one dies from a “broken neck”. A broken neck (pure speculation on my part) most likely caused when he fled the police and then was subsequently tackled by them. Especially if that tackle occurred at full running speed on a hard surface, i.e. cement or pavement. But heaven forbid we put any type of  logic into this discussion, that would be raaaaacist. Fuck off. Call the Whaaaambulance ….

But the press has to get their pound of flesh. And they did. As a result, Now yet another American City is a tinder box setting on an open flame, 15,000 Americans were held hostage, property damages and the cost to the tax payers will reach in the  millions ….But at least, thank God, the idiots in Baltimore – thanks in part to an imbecile of a Mayor, and the professional race bating idiots like Obama ….got their “free range”.

You built that Democrats. Good Job.

*** Quick Update MD Governor declared a state of Emergency Monday – National Guard is placed on Standby. Massive fires and looting are being reported.

When I first saw the title, I was thinking “Free Range? As in Free gun range? Sign me up!” I’m glad I no longer have to fly down to the dump of a city 4 times a year. (Work related) You know why the free range thugs engage in free range thuggery don’t you? They know that they won’t get… Read more »

well, I guess the prez felt comfortable enough turning the whole thing over to his minion/mayor to party with his ass suckers at the press dinner Saturday night. He partied and yucked it up while those Orioles fans were penned up inside Camden Yard. Now there are reports of cops injured, one severely by the free range retards. One encouraging… Read more »

4.9 Acres of woods. Makes for all sorts of nice places to unleash a wee bit o’ hell.

LC IB CiSSnarl5.7 Imperial Foreign War Correspondent @ #: 4.9 Acres of woods. Makes for all sorts of nice places to unleash a wee bit o’ hell. I live in a city now. 🙁 On the other hand, I live in an open carry state. In fact, I saw someone yesterday as I was walking to the market exercising his… Read more »

Anthony Cumia is live-blogging the newsfeeds, if you want a non-PC take on it all. https://anthonycumia.com/ I always feel bad for the law-abiding people stuck in those communities. What hell to live there. Of course the only way to stop this Lord of the Flies stuff is to administer a smackdown, good and hard, but no one in the Goobermint… Read more »

One of my cousins is there now. He’s stuck in his hotel, and just posted on FB that the Guard is on the way. What that will do, I don’t know since I have no idea what the ROE will be. My cousin said Oblowme was urging authorities to show restraint. Typical.

“What are we supposed to use — harsh language?!?”

JonB @ #: Until we start killing them in large quantities, this will only get worse. It is time to start killing these parasites without mercy or second thought. The scum are now attacking police. It’s only a matter of time until one or more manages to get cornered and opens fire. Now as to the cause of all this?… Read more »

But, but, but… Freddie was such an upstanding young man. He had a full time job as an undocumented pharmacist and undocumented property disposal specialist.

Hannibal Lecter had it right in one sense. He only ate the free range rude. I say we just shoot them.

As Baltimore burns, Mayor Stephanie Rawlings-Blake is turning the flip-flop into a high art form, to the point where she is now apologizing to the rioters for calling them “thugs.” [So yet another word that we cannot use anymore.) “I wanted to say something that was on my heart … We don’t have thugs in Baltimore. Sometimes my little anger… Read more »

And where there’s smoke, there’s anti-Semitism. Anti-Israel activists are trying to hijack the Baltimore riots. While William Jacobson points out what he sees from Palestinian supporters, I wonder what Freddie Gray would make of it all. When there is a riot or other protest in the U.S., particularly if involving minority communities, “pro-Palestinian” activists try to hijack it and turn… Read more »

Radical Redneck @ #:
Yup, I was just listening to Howie on my way home form work. One of the benefits of living in the northeast.
(Open carry in my state with a good chance of Constitutional carry is another)