…along with our apologies for our extreme lack of postings, obviously, which we blame on the season but, most of all, 70 hour work weeks. About which we’re not complaining, considering that millions upon millions of our fellow Americans don’t have any job, thanks to Beloved Ear Leader and his Age of Plenty. It would be the very height of impropriety and ingratitude to be complaining about too much work in this day and age.

But it does take time away from other things.

Now, in case anybody’s still around, we were going to put up a merry old message in tune with the festive time of year, but developments over the past few days left us in no mood to feel even the slightest bit charitable. Particularly the events surrounding the murders of these two fine Americans: 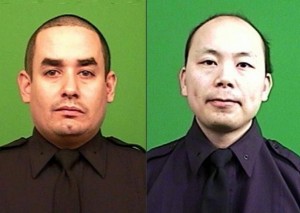 The above gentlemen, Officers Ramos and Liu, were both brutally murdered on Saturday, December 20, while sitting in their unit minding their own business. They were murdered by a worthless hoodrat swine who acted in response to the incessant rabble-rousing, encouragement and incitement to violence against cops committed by, among others, these deranged, highly dangerous and still at large individuals:

Obviously, there are more of them, such as Al Sharpton, Jesse Jackson and the entirety of the Democrat Media, but those are the three most high profile perpetrators in this case of clear incitement to violence.

They now have their hands covered in the blood of those two officers all the way up to their elbows. Period. End. Stop.

To be sure, some might argue that “the responsibility lies with the murderer alone”, “this was just one lone extremist in no way representative of the mass of the protesters”, and “nobody can know that the murderer was encouraged by those individuals” and those arguments have already been raised, most disturbingly, but not unsurprisingly, by the usual milquetoast ‘conservative’ appeasers of leftism who ought to know better.

To the first: Yes, the responsibility for pulling the trigger lies with the murderer. But only the most naive of idiots would ever truly believe that those who coddle and encourage hatred of any particular individual or group of individuals bear no responsibility at all. Sure, none of the rabble rousers said, in so many words, “go kill some cops”, but they might as well have. When faced with riotous, rapine, looting, arsonist mobs chanting “what do we want? Dead cops! When do we want it? Now!”, they did nothing at all, except to preach their “understanding” of those mobs and their frustration.

That is the same as endorsement. Only the basest of idiots think that inaction is not an action in and of itself. Particularly in the case of the last individual pictured above, the communist loving mayor of New York, whose responsibility it is to ensure that the peace of his demesne is upheld. When he failed give the order to clear the streets of the rabble after they’d started howling for the murder of police officers, he tacitly endorsed their desire to see murders happen. A leader leads by example, and that also applies when the leader doesn’t lead at all. There is no escape clause there.

Inaction from a leader is the same as approval. This is a lesson beaten into the skulls of anybody worth wasting oxygen on.

To the second: Isn’t it amazing how those “mostly peaceful” protests arranged by leftist mobs always turn into looting, rape, arson and murder and how it’s always done by “a small minority totally not representative of the protest as a whole”? Correct us if we’re wrong, but we can’t recall a single incident of, say, a Tea Party rally that ever brought about any sort of vandalism or violence. It’s almost as if violence is almost exclusively a weapon of the Prozi Left, a ridiculous hypothesis which history clearly shows to be… er… entirely true.

It’s much like how #NotAllMuslims commit 99.9999999999% of terror attacks in the world today, yet to even suggest that there might be a connection between the two is simply beyond the pale, we tell you!

We hardly think that it’s beyond the pale to draw conclusions from that.

To the third: That’s just ridiculous. We most assuredly do know what the murderer’s motivation and intentions were, because he helpfully posted them himself on social media.

By early Saturday afternoon — just three hours before shooting Liu and Ramos — vile anti-police threats were posted to Brinsley’s Instagram page. The threats referenced the ­recent police-involved killings of Garner and Brown.
“I’m Putting Wings on Pigs Today,” a person believed to be the gunman wrote. “They Take 1 Of Ours .?.?. Let’s Take 2 of Theirs,” the post continued, ending with, “This May Be My Final Post.”

The “believed to be” is just run of the mill journalist “cover your ass” phrasing. It has been proven beyond a reasonable doubt that the postings were made by the murderer.

There is a clear case here and there should be no doubt in any reasonable person’s mind as to where the real responsibility lies here, where the actual root cause for all of the trouble that plagues our great nation is to be found.

And it frustrates us no end to read the inane blather of people that we count as being on the side of what’s right ponder and pontificate about how we can’t, or shouldn’t, draw any “unfair” conclusions from all of this.

It’s one thing to fight an existential culture war with both hands tied behind your back, but when the people who are supposedly on your side are helping tying the knots???

Yes, yes, we know… it is unpleasant to have to face the realities of the world in which we live, particularly so when said realities don’t conform with what you, in your civil, kind, fair-minded nature wish to believe, but you can’t bloody well fight if you refuse to look at the facts. We don’t give a fig if it’s uncomfortable. It is what it is and, unless we want to bequeath to our children a world in which the enemies of civilization and liberty won, we need to wake up and accept that.

Does anybody who is not a certifiably insane leftist psychopath walk around saying that the October Revolution that brought us the “blessings” of the Soviet Union was the result of a “few extremists taking over a mostly peaceful protest against the Czar?” That Lenin was a “civil rights” protester whose well-intentioned words against social injustice were taken too far by a few zealots?

Does ANYBODY who hasn’t the IQ of a boiled carrot believe in the good intentions of the many various factions on the Prozi Left?

What the everloving FUCK will it take for those of us who read their book, those of us who, like our friend Bill Quick, were once counted among their ranks to convince enough people that no, Virginia, this is NOT all “coincidence”, it is in fact how the game is played according to the Prozis?

It’s Marxism 101, you fools! And yes, we DO mean “fools”, because they’ve published books about it. Pick one up and read it, why don’t you?

And no, we don’t fight “fair”, because we’d lose if we did. Anything goes. The Cause™ is all. The end justifies the means. You have to break eggs to make an omelet. History is full of suffering borne by the innocent in order to advance the Greater Good™ so you’re not being deceitful. Is it not better to sacrifice a few hundred innocents than to allow the suffering of thousands to continue?

Do we have to go on quoting until we die of old age what we can recite in our sleep about the ideology that we’re up against before anybody starts listening?

The murders won’t stop before they’re stopped, so take your time. Just remember that with each second of not facing up to reality, more innocents like Ramos and Liu are going to die.

Oh, and as a final thought, because we anticipate the same charges of incitement being leveled against us here: No, we are NOT suggesting, encouraging or even remotely endorsing random, rampant violence against Leftist morons here. Unless they’re threatening you with same, in which case it would be self defense. Leftists, however abhorrently ignorant and inexcusably dumb they are, still have the same right to be offensively dimwitted as the rest of us. That is what liberty is all about. The understanding, without need for explanation, that as long as it neither picks your pocket nor breaks your bones, ignorance is no excuse for violence.

His Imperial Majesty might very well want to punch the Prozi fucknozzle preaching “social justice” and “the tyranny of cis-gendered patriarchy” in the nose but, in the end, we can always laugh derisively, mock him mercilessly or just walk away, all of which are acceptable responses in a civilized society. The latter is acceptable. The former is not. True devotion to liberty demands of you the willingness to tolerate, as in “allow the existence of”, views you don’t agree with. Any bloody idiot, even a Prozi, can do that for views they do agree with. That’s no achievement.

What it DOESN’T mean is coming up with excuses for inexcusable behavior in the name of “civility”.

Does anybody who is not a certifiably insane leftist psychopath walk around saying that the October Revolution that brought us the “blessings” of the Soviet Union was the result of a “few extremists taking over a mostly peaceful protest against the Czar?” IIRC the October Revolution was not aimed at the Czar but the new Provisional Government. In a bit… Read more »

Another black yoot decides to point his gun at a cop in St. Louis with predictable result of becoming dead (good shooting officer). Rioting resumes in 3,2,1 – no, wait, already under way. Of course the two companion yoots did not get a scratch (they were smart enough or unarmed) so will testify against said officer speaking of how the… Read more »

I read something that a few hours after the officers were murdered, another moron was shooting out windows with a .357. Police arrived and, this is where I’m getting mixed information, either pointed the gun at the officer, then pocketed and ran, or tried to fire it and forgot he was empty. Either way, the cops chased him down and… Read more »

Oh, and a Politically incorrect MERRY CHRISTMAS to all!

And those who are Jewish, Happy Hanukkah!!

And all I want for Christmas is a new job.

How cool is this?

pity whoever did it is now looking at life in a supermax for violating the civil rights of the dead.

And I bought myself a nice Christmas present.