Ask, And You Shall Receive…

And His Imperial Majesty is so very much in!

His Curmudgeonly Eminence, Francis Porretto, has gone forth and established the following: 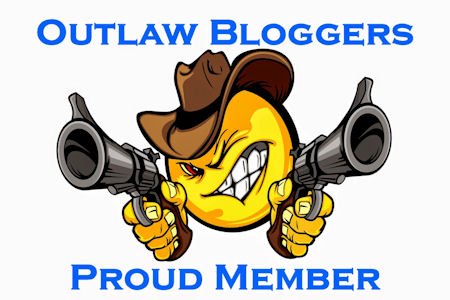 Not only that, he has set up a website for it, which shall forthwith be found on the Imperial Blogroll. Now we just need to figure out the code to our own site well enough that we can put that beautiful logo on our sidebar.

All we need now is for the ORIGINAL Outlaw Blogger, Jeff Goldstein, to grace us with his presence.

He was, after all, Outlaw before Outlaw was cool.

UPDATE: Speaking of Jeff, his mother just passed away. That would be enough sorrow to enter a man’s life, but Jeff has also been cursed with a thief of a brother who greedily seized for himself all of her assets, including but not limited to life insurance policy, sale of home etc., leaving Jeff to hold the baby as far as funeral costs and such go. So we’re sure he could use a bit of encouragement in any shape or form you might have it.

See my question in the Tarawa forum.

We are now a tyranny and no one seems to care.

Re Jeff Goldstein: His mother just died a couple of days ago (see his blog); his worthless brother raided her estate and bank account etc. while she was still alive, and now has cashed in on her life insurance policy and is sticking Jeff with the costs of her funeral. So he could use some moral support over at Protein… Read more »

Your Majesty, I need an email address for you, so I can invite you as a Member with posting privileges there. I can’t find any email address on this site, so please email me at fran.porretto@yahoo.com.

Your Majesty, I need an email address for you, so I can invite you as a Member with posting privileges there. I can’t find any email address on this site, so please email me at fran.porretto@yahoo.com.
fporretto recently posted..Hear Ye, Hear Ye! Part The Second!

Sire, look there and find ME for one!