TERROR has struck the heart of Canada today after a gunman shot dead a ceremonial guard at the war memorial, before being killed in the halls of Canada’s parliament.

A known jihadi walks up to a soldier at the memorial (What price your extensive gun laws NOW, Canada? Didnt stop this guy, did it?) and murders him point blank.

Mr Harper said the shootings today and earlier this week in Quebec showed that “Canada is not immune to terrorist attacks”.

No sir, you are not.

Despite your leftist bleatings, despite your snivelling and hiding behind the UN about the “illegal” war in Iraq..the enemy has come to you, and sent you a message, clear and plain as day.

There is no safe place. In war, there never is.

Go away and hide under the bed, appease the savage in hopes he will leave you alone, is no guarantee he will not still come to you in the dead of night. Thanks to the Sergeant at Arms, said murderer now answers to a higher Court. 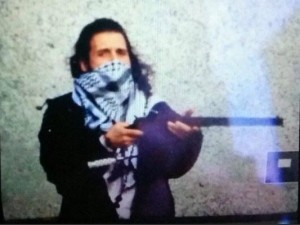 There is the face of your future. Mark it well. And remember.

For there will be others.

I’m just reading about this story. Stupid quote #1 – Security in Ottawa came under criticism after the gunman was able to run through the unlocked front door of the main parliament building. “It caught us by surprise … If we had known that this was coming, we would have been able to disrupt it,” Gilles Michaud, assistant commissioner of… Read more »

More restrictive than ours. Not that it ever does any good. But get the gun grabbers to see that?..not a chance in Hell.

This shit is only going to get worse as our Jihadi-in-Chief steps up his support of the caliphate.

If that picture is of the killer I suppose we’ll be hearing how evil assault lever actions are and the need to ban them.

My deepest condolences to the family, friends, and professional associates of the one slain.
I will not indulge in any ‘told you so’ schadenfreude here.
It is dishonorable.

So many carp about the Left rolling in the blood of innocents, but only too often I see the same here.