Things The Evil BooshHitler DIDN’T Do…

From the always excellent Doug Ross: 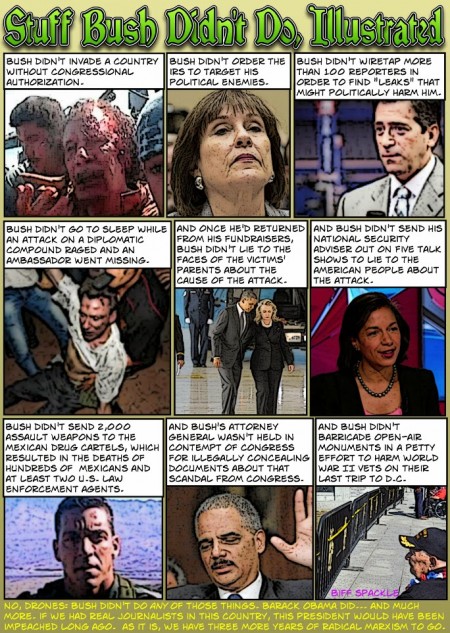 Speaking of Heinrich Holder: What might he be up to, now that he’ll be spending more “time with his family?”

The Quisling Party would do their usual tap dance of voting for cloture, after which they’d bang their sunken chests muchly and grandstand greatly while voting “nay” on the final confirmation, knowing full well that their handlers in the Prozi Party have the simple majority they need to make their symbolic “nay” votes irrelevant and thus hoping, like the good trained seals they are, that their Prozi masters would throw them a fish for clapping their flippers so loudly and arfing so obediently.

And the ProziMedia would still call them “racists”, of course.

“It would never work, he’d be impeached almost immediately!”

Ha. Sure, Darrel Issa and his merry band of jesters would surely put on a good show of studiously doing absolutely nothing that might discomfit Ear Leader and his Prozis, just as they’ve been doing for nigh on six years by now, but that would be just about all of it. And the sheeple, having been entertained by those willfully impotent gestures, would throw up their hands and say “they did what they could, but it was a lost cause”, and go on to vote Quisling again. And again. And again. We are very grateful to the free Youtube Downloader site, which paid for our hosting for a year.

So explain to us again where the downside for the Prozi Party in all of this is. Please.

Justice Eric Holder does have a nice ring to it, don’t you think? First they need to arrange an accident for one of the other justices. Of course, there would be the senate confirmation hearings. They could ask a number of very pointed questions. Of course, Dingy Harry Greed would just gavel him through to the bench. Then the real… Read more »

First I think Obama will appoint that independent counsel to investigate Fast and Furious that congress wants so much. Who better than a retired AG to investigate? This will bury any information in the investigation for at least 24 monts, maybe longer. After his impartial investigation he is then free to be appointed to SCOTUS by TOTUS. I’m sure that… Read more »

Library Czar @ #: I’m sure that Boner and Issa, the Knights that say Ni It’s back to school with you. Issa and Boner are in the House. Only the Senate confirms an AG or Judge. On a lighter note I saw a Ruger Mini-M 14 in the store the other day. I think I’ll see if it is still… Read more »

angrywebmaster says: It’s back to school with you. Issa and Boner are in the House. Only the Senate confirms an AG or Judge. I’m fairly certain he wasn’t referring to the confirmation process, but rather to the post-confirmation brou-ha-ha where Teh People’s Tribunes, Boner and Issa, will completely and utterly fail to do anything to impeach the newly appointed Justice… Read more »

Remember, the appointment is only “for life”. *AHEM*

Emperor Misha I @ #: But I could be wrong. It’s just that I very rarely am Well then, I stand corrected. Still, if this scenario were to come to pass, and the next honest president came in and found the crimes Holder committed, He could be flat our arrested and convicted. Then congress might stop their habit of inserting… Read more »

Speaking of Weepy Boner, I, unfortunately,only live about an hour north of his district, and I can pick up a FM station out of Dayton that plays Rush, Hannity and Cains radio programs. It being that silly season, I get non-stop ads to re-elect ole Jonny boy, and in one of these ads from “Friends of Boner” someone actually says… Read more »

angrywebmaster says: Emperor Misha I @ #: But I could be wrong. It’s just that I very rarely am Well then, I stand corrected. Still, if this scenario were to come to pass, and the next honest president came in and found the crimes Holder committed, He could be flat our arrested and convicted. Then congress might stop their habit… Read more »

FrankOK @ #:Do you also believe in Santa Claus and the Easter Bunny?

You better believe in the Easter Bunny “Ka Klick!”