Allahpundit is getting all queasy just thinking about what the ISIS types might be doing with the Yazidi women and children that they’re capturing, and we honestly can’t blame him. About the getting queasy part, that is. Although our reaction is more along the lines of projectile vomiting and an oath to kill every last motherfucking one of the beasts responsible or remotely responsible for it.

OK, so he’s not without imagination at all, he just can’t get himself to quite openly say what the barbarian koranimals do to their women captives. Maybe that would be too raycissss or something, but we’re fairly certain that he knows just exactly what it is that he’s too afraid to put up on HotGas. It’s not like he doesn’t have 1,400 years of history to tell him.

…but I can’t bring myself to imagine what they intend to do with the children.

We can. Not because we enjoy it, but because we know exactly what those subhuman warts in the arse of humanity do to children who are too young to rape, there are 1,400 years of history to tell us that too.

And the problem with the West, the reason that we’re losing and losing badly at this point, is that the West has become too neutered, too afraid of facing reality, to admit what we know to be true. It is, after all, so much easier to just stick your head in the sand and your fingers in your ears while singing “lalalalala, I can’t HEAR you”. Especially when reality is so damn horrifying. But even more so because accepting reality will, without fail, force any even remotely human being to realize what their duty is regarding those koranimal butchers, and that is just too gross, isn’t it?

Better to just not talk about it so we can still choose the coward’s way out and pretend that you can reason with that which knows no reason at all, being nothing but animals. Otherwise, you might have to get your hands dirty, and that wouldn’t do at ALL.

Better to send the sheepdogs off to do your bidding while pretending that nothing is happening that might upset your delicate stomach over tea. Better to hamstring them in every possible way, condemning thousands of them to death by refusing them the authority to do what’s necessary to WIN the conflict that you’ve sent them off to fight on your behalf so your dainty little well-manicured hands don’t get grime and guts on them. Better to continue to sleep soundly under the security blanket provided by better men and women than you will ever be and then micromanage and Monday morning quarterback their every move so you’ll feel better about yourself.

But none of all of this would be possible to do unless you could maintain the fantasy of not knowing what those animals that you send off your sheepdogs to keep away from the door are doing, is it? Because if you had to stare the consequences of letting the animals live in the eyes, if you had to even open those eyes and look reality square in the face, then it would be quite difficult to maintain your “nuanced”, “civilized”, “refined” facade, wouldn’t it? It would be kind of hard to answer your grandkids’ question about what you did during the Great War, wouldn’t it?

So let’s not talk about that, shall we?

This sheepdog has had it with that attitude.

So we’re here to help you, Allahpundit, and everybody else who still thinks, after a millennium and a half’s worth of cold, hard evidence of what happens when you don’t kill the pisslamic wolf but try to “reason” with him.

We are going to shove it right in your face, and then you can wax poetic about “realistic” ways of dealing with this. Then you can talk about outreach, detente, ceasefires, mutual concessions, negotiations, coexistence and whatever other effeminate catchword you use to hide your own cowardice behind.

THIS IS WHAT HAPPENS TO THOSE CHILDREN: 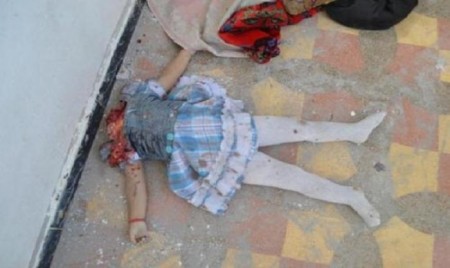 Did that upset your stomach?

Time to wake up, sheeple.

You’re not getting any more chances.

Enjoy your lattes and your cucumber sandwiches.

The problem with “negotiating” with terrorists, is that we neglect to place them in the “negotiating position” first.

That is, your knee in their gut, and your knife at their throat. You then negotiate which ear the bullet goes in.

Just trying to be helpful. . .

Of course Ala Pun’s not required to monitor this blog, so the dude may miss out. And we’re all missing out on the opportunity to wreak holy hell on the latest horde of Islamidiots, if that’s what any of us would care to try. Just think of the fun things we could do, & the videos we could make, with… Read more »

If I was setting the rules of engagement, I would require that all bullets and bombs be BACON infused. No pisslamic heaven for you subhuman animals. I’d also bury all of them with swine guts. No quarter, No Mercy to any of them. This is a fight for humanity. Please post all images of the barbarism. Let the people know… Read more »

I agree!!! Every piece of munition fired would be bacon dipped and it would be a Limit Free, Open Season on every fucking Haji who even remotely THINKS anything close to support for these evil motherfuckers. It will be a beautiful day when we are ridding the world of these scumbags with no worries of having to “tag out” and… Read more »

LC Mike in Chi says: A wee bit of bagpipes for the Allah Apologist… I wouldn’t call him an “apologist”, because I’m fairly sure that he’d never try to apologize or justify their actions, he’s just one example of what is symptomatic for almost our entire society, which is a stubborn unwillingness to face reality because reality makes us “angry”… Read more »

Imperator: Apologies to A/P for my half-witty shot. That said, I agree that it is becoming more difficult as this ‘Whirlwind To Worldwide Wackiness” causes the sheeple and the sheep dogs to build walls of segregation and isolation. The lambs need to be protected at all costs. They will be our salvation. From geeks to gearheads, they need the uncluttered… Read more »

I like the version with the Polish Winged Hussars. Seems more apropos. Sorry, no linky.

This will be linked. And the link to mine I thought more appropriate than the MOST recent.

We need new Crusades, led by a Patton or Sherman, and tell them there is no limit. Slash, burn, and destroy every one of these subhumans, and then salt the earth so that nothing grows.

lc purple raider @ #:10
Should the Patton or Sherman appear please direct him to the white house FIRST where the islamist-in-chief is holding the door wide open for his subhuman comrades to enter! That God damn door stopper has to go.

You then negotiate which ear the bullet goes in.

Obviously it goes in an eye.

If I ever get to DFL, I hope to play this.

Could someone please explain to me why these assholes aren’t an endangered species? I’d really like to know why supposedly-civilized people tolerate this shit.

Retired Spook says: Could someone please explain to me why these assholes aren’t an endangered species? I’d really like to know why supposedly-civilized people tolerate this shit. Because “civilized” people for some reason trust “the authorities” to deal with such things. Anyone in their right mind would see the foolishness to that and would be loading another 30 round magazine… Read more »