Anybody Up For Pizza?

Looks like it’s on, and the market is going go be flooded by Paleosimian Crispy Critter Snacks right soon:

Israeli tanks, infantry and engineering units were ordered to launch a broad front assault on Gaza on Thursday by Israeli prime minister Binyamin Netanyahu as last ditch efforts to secure a ceasefire deal in Cairo collapsed.

According to the Jerusalem Post, the decision to launch the ground invasion was taken at an Israeli security cabinet meeting on Tuesday night after Hamas had rejected an Egyptian ceasefire proposal and after Hamas militants tried to infiltrate Israel through a tunnel from Gaza.

Ham-ass were probably unhappy that the ceasefire proposal didn’t include the words “and all the Joooos must kill themselves within two weeks.”

In reply, Hamas said Israel’s ground incursion into the Gaza Strip would have “dreadful consequences”.

His Imperial Majesty certainly hopes so. Piles of paleoswinian bodies rotting in the sun, bloated and stinking while the few surviving mooselimb animals wander among them, starving and wailing.

Wait… That’s not even remotely dreadful.

“It does not scare the Hamas leaders or the Palestinian people,” Hamas spokesman Sami Abu Zuhri said. “We warn Netanyahu of the dreadful consequences of such a foolish act.”

We’re certainly willing to believe that it doesn’t scare Ham-ass’s “leadership”, as they’re most likely busy hiding in bunkers as deep as they can dig them while their retarded minions scurry about upstairs stacking dead children for photo ops.

Misha, an Israeli friend sent me this: it’s a video, posted on Facebook, taken by ISRAELI ARABS celebrating the rocket attacks on Ashkelon and excitedly screaming “Aloha Snackbar!!!” (seriously, I will not write their stinking slogan).

They are vipers in Israel’s bosom. Horrible.

On the comments below the video, apparently all in Arabic, they’re all quivering in ecstasy to see the hated Jews die: if you can stomach it, click on the “translation” option and see for yourself.

Wow, these people are wholly given over to hate.

The IDF should drive the scum into the Sinai and let them rot in the desert.

Reminds me, it’s time for some Pizza for the IDF.

Veeshir @ #4: Thank you, my friend. I was about to google that up to post it.

While I’m happy the Israelis are finally starting a vermin extermination campaign, the Israeli army mounting a “broad frontal assault” on gaza is a bit like hunting rabbit with an M1 Abrams.

While I’m happy the Israelis are finally starting a vermin extermination campaign, the Israeli army mounting a “broad frontal assault” on gaza is a bit like hunting rabbit with an M1 Abrams.

The Israelis are really serious this time. They’ve sent in the deadly assault dozers!!

angrywebmaster says: LC R6 @ #: While I’m happy the Israelis are finally starting a vermin extermination campaign, the Israeli army mounting a “broad frontal assault” on gaza is a bit like hunting rabbit with an M1 Abrams. The Israelis are really serious this time. They’ve sent in the deadly assault dozers!! angrywebmaster recently posted..Global Warming believers use far more… Read more » 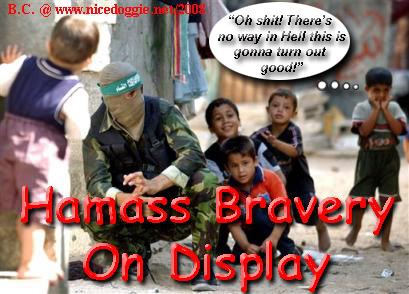