Just to let y’all know that Bill Quick has his new book out: 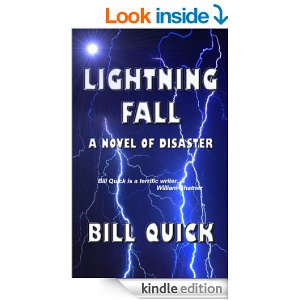 From the book’s blurb:

Three terrorist attacks are launched from freighters against the United States. Only one fully succeeds, but in the blink of an eye all of the country west of the Rocky Mountains is transformed into the technological equivalent of the 18th century – no electricity, no computers, no electronics of any kind, and none of the amenities of modern life that depend on them.

This is the story of ordinary and extraordinary people, high and low, who struggle to survive in a mortally wounded nation, as America’s enemies within and without circle for the kill.

A Latino gang-banger becomes Mayor of a devastated Los Angeles; a gay survivalist fights for his life in San Francisco; an ordinary Indiana housewife and her three children struggle to keep their lives together in a crashing economy; a shrimp fisherman in Louisiana watches a mushroom cloud rise over New Orleans; the Admiral in charge of the military defense of the nation faces a storm of enemies from every corner of the compass; and the President of the United States and the Speaker of the House of Representatives battle for supremacy as the lives of sixty million Americans hang in the balance.

Now, we trust that not much of an introduction of LC & IB Bill Quick is necessary, suffice it to say that he’s been around for even longer than the Imperial Majesty and is, indeed, the one who coined the term “Blogosphere.” He’s also a terrific writer with 28 published works under his belt and a good friend to boot.

If you do get the book and like it, please consider plugging in a couple of words at Amazon in the form of a review as those things matter a lot.

P.S.: The link (click on the image) is to the Kindle version. To those of you fundamentally opposed to miss an opportunity to rape one of Mother Gaia’s trees, a dead tree edition will be coming out later this week.

I cannot imagine the horror of San Franciscans in able to check their FB status, set up an Uber town car to take them across town, or access DU… Yes that would be a calamity of huge proportions

And how the Hades are they going to be able to cool their “ironic” PBRs?

I put that in my wish list last weekend. I’ll get to it eventually.

No Phone, No Light, No Motorcars, not a single lux-u-ry…

Got mine tonight. Kindle I love you……………

Quick put a LOT of time on his researching this book, – consulted military folks from all three branches, DHS people, and medical professionals – all in all, he spent years getting his facts right. This is a VERY good read and my whole family, who’s read it, cannot recommend it highly enough. It’s fun, well written, and you just… Read more »

LC MuscleDaddy @ #: Well, yeah. Also no food, water, heat, police protection, or crack cocaine. So the folks do get a little…restive…

LCBrendan @ #:I love Kindle, too. But if anybody wants to slaughter a few harmless trees growing of Gaea’s breast, you can get the dead tree version here:

I’m working on a dealio to supply autographed copies at a slight discount, even.