Just when you think that Moochelle cant get any lower…. 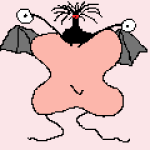 Lady Gaga, Katy Perry, and Miley Cyrus aren’t the only stars readying albums for the new season; First Lady Michelle Obama is as well. Today it was announced that Ms Obama’s Let’s Move! campaign will release an album titled Songs for a Healthier America next month. The 19-song compilation touts the virtues of healthy living and features song titles like U R What You Eat, Veggie Luv and the slightly less emphatic We Like Vegetables.

Thats for the unwashed commoners, of course….God forbid that the Anointed One’s spouse be subjected to such plain fare.

UR what you eat?

Then she must be full of shit when not having us pay for what she eats.

Just coming by with some rather bad news. Our friend LC Draco is undergoing surgery after being diagnosed with an aneurysm. Any prayers and good wishes are appreciated. I will keep y’all updated as soon as I hear anything.

I don’t recall the Bushes, or the Clintons for that matter, telling us that we can’t haz cheeseburger while stuffing themselves with pate de foies gras.

I seem to recall that GHW Bush had something to say in the subject of Broccoli, IIRC.

And forgive this post. I forgot to check off the notify me box.

I don’t recall the Bushes, or the Clintons for that matter, telling us that we can’t haz cheeseburger while stuffing themselves with pate de foies gras.

Unfortunately, I have personal experience with how poorly Bush-sama handles an elegant repast.
– Miyazawa Kiichi

Okay, first of all, may I just say that “We Like Vegetables” is simultaneously the lamest and the most unintentionally hilarious title for a song ever and I can’t wait to hear the dubstep remix. Second of all, I’m missing the point with the menu. Michelle Obama’s pet crusade is all about eating healthy food, right? Well, that menu looks… Read more »

Oh, I never thought that Moochelle couldn’t get any lower. I keep expecting her to.

I taught the Constitution for 10 years Did he? Funny that, seems to me that IF he did (and as we have no college transcript and he is yet to disclose any documents to verify this bullshit claim) he’d know what the 1st, 2nd, ESPECIALLY the 4th and the 10th amendments say. Maybe if we had more details on this… Read more »

LC Xealot says: It’s all about creating a separation between us and them. That’s why people like Warran Buffet are actually for tax increases. It’s not about a specific amount of money. It’s about ensuring the aristocracy and the middle class never change places. The middle class is the stepping stone from poor to wealthy — and they don’t want… Read more »

For someone who claims to have taught the Constitution, he seems to either not know or not care, as that document has literally been spat upon and repeatedly violated by this empty suit.

What part of “SHALL NOT BE INFRINGED” doesnt he get?

Hopefully the pointy end will be exposed soon.