As if you needed any more proof of pissident Obam-bam’s malignant narcissism, we have this excerpt of his speech on Memorial Day:

“For the first time in nine years, Americans are not fighting, dying in Iraq.”

We mean, forget about the solemn occasion, remembering all of the heroes who died for our nation since it was founded, on Memorial Day 2012, just before an election, O-auto-eroticism-bama just has to talk about how he, personally, brought the fighting in Iraq to an end. Much like he personally rappelled down from his airborne golf cart to personally strangle Osama bin Laden in his own intestines while Seal Team 6, graciously, had been brought along to witness this Gutsy Call, this Most Brilliant Military Move in All of History that our beloved Grosster Feldherr aller Zeiten brought about.

Those 8 years prior to his “presidency” never happened. Kind of nice to see that there is something that he won’t blame on Bush.

Oh, and just in case you’re not sufficiently pissed off, here’s one of the “photos of the day” from the official White House website: 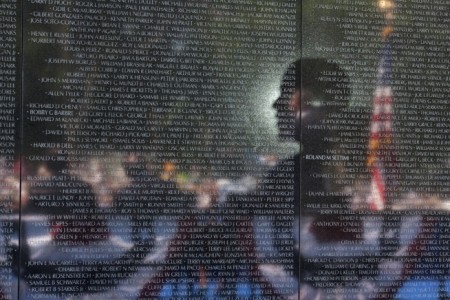 Look! They even got the customary halo in there!

His Imperial Majesty is sorry that he’s going to fail you here in being unable to provide his normal snark in response to this, but we are literally without words now. Nothing we could possibly conjure up from the deepest depths of our most derisive, angry Vault of Snark™ could ever hope to do justice to this blatant display of malignant, narcissistic hubris.

To have “president” Choom Gang glorify himself against the background of the Memorial Wall, of ALL things…

Evidently Dolf’s aforementioned title was also known in the contracted form of “Grofraz”–which may come in handy!

Funny, I just got a message saying I must be logged in to post. This page says I already am! (And it did it again.)

Whew! Quite the legend in his own mind. Time to take out the trash. And, the photo is pure trash as well. There is nothing noble or even noteworthy about Teh Won™, no matter how often the Lamestream Media honks about it. You are correct, My Liege, there aren’t any words left to snark about this Total-Alt-Luser and his Gang… Read more »

This brings violent nausea to mind. I couldn’t read this for 2 days, since I have to work tonight and I wouldn’t have been back from my roadtrip.

Time to acid-wash the Memorial.

“For the first time in nine years, Americans are not fighting, dying in Iraq.”

If only that were the truth.
(Spit n’ glare smiley)

do you know how to starve a democrat?

Hide their food-stamps…………… under their work-boots.

My father was a Vietnam vet. Both grandfathers WWII. Whoever took that picture, I compliment their composition. Now please, please, please, go hang yourself from the closest tree. You have chosen to take a day meant to honor our glorious dead, and make it about a narcissistic, socialist attention whore. I hope you never sleep well. I hope food loses… Read more »