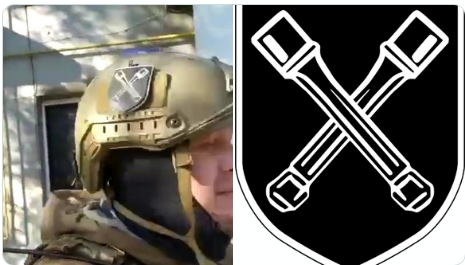 Things that we’re not allowed to mention, of course, because any suggestion that the saintly, never done anything wrong, absolutely pristine democracy of Ukraine might embrace neo-Nazism in their armed forces (and, presumably, elsewhere, since the armed forces ARE part of the government, so anything that goes there probably wouldn’t be off limits outside of it) is clear indications that you’re a lying, disinformation-spreading Russian agent.

While I am happy about the liberation of Kherson, wearing the SS Dirlewanger Brigade patch is not a good look.

This was arguably one of the most horrific SS units of the war, made up of convicted murderers, rapists and pedophiles and committed innumerable brutal war crimes. https://t.co/5CcECNIEs5 pic.twitter.com/sv1kMeZnPH

Now, if you’re an average Joe, you’re probably thinking “what’s a Dirlewanger?”, here’s a Safe For Wikipedia explanation, but we warn you, it’s still not for the weak of stomach.

We’ll just add that the ex-convicts of the Dirlewanger Brigade were so brutal and inhumane that even the SS found them distasteful. And that was the Allgemeine-SS, the part of the SS that actually ran the Sonderkommandos and the concentration camps. It would take a bit for a unit to make those monsters want to throw up.

And then there’s the poor, misunderstood and, by the way, totally NOT Nazi Azov battalion of the Ukrainian Army, pictured below: 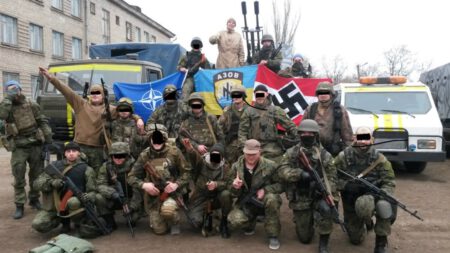 Nope. No sign of Naziism there. We can’t see it, we swear! OK, we might be able to see it if we’d uncover our eyes, but the MSM that even conservatives have suddenly, and quite confusingly, decided to believe every word of as far as the Russo-Ukro war goes tells us that we mustn’t believe our own lying eyes, lest we immediately be cast out into the outer darkness of being Russophile propagandists.

By the way, see that symbol on the Azov battalion colors in the background (the one that says “A3OB”, which is Cyrillic for “Azov”), the one that looks like an “N” with a vertical bar in the middle? Still don’t see it. Here, let us help:

Then there’s this guy: 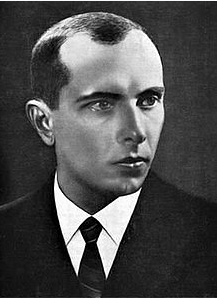 His name was Stepan Bandera. He was a famous Ukrainian Nazi collaborator and part of the Gestapo. You can read a bit of his CV here, but you probably wouldn’t want to, as it involves “Before killing women, the nationalists had raped them, then cut off the noses, ears and chest. Men dealt with axes. Over two brothers-teenagers by the name of Gershkevich who tried to escape and call for assistance to Soviet partisans mocked with cruelty. They cut off the hands and legs, ripped stomach, and a wound filled with salt.”

He is still celebrated in Ukraine to this day:

But nope, Ukraine definitely doesn’t have a Nazi problem, and anybody who says otherwise is a filthy liar who lies.

The MSNBCNNABCWHOGIVESAFUCKANYMORE says so, after all.

OK, His Imperial Majesty thinks that’s enough sarcasm for one day, so we’ll be completely serious from here on:

Question number one: Does this mean that the Ukrainian people are Nazis?

Of course not, that would be as irredeemably stupid as saying that Americans, of which we are one, are Nazis because we sure as Hell have Nazis here in the US of A too. People are, if you really believe in free speech, allowed to have any opinion, no matter how disgusting, that they wish to have. If you aren’t willing to protect speech you despise with every fiber of your body, you’re not really a believer in free speech. You’re just like a Libshit fascist, you just believe in oppressing other opinions than the ones they want to oppress.

Question number two: Does this mean that the Ukrainian government, including Saint Zelensky of the Free Lunch™, are all Nazis?

Not necessarily. But the fact that they not only tolerate Nazi opinions and symbolism, in itself not conclusive proof of sympathy, it could be that they, too, believe in freedom of speech, but having organized military units openly demonstrating allegiance to Nazism and do absolutely NOTHING to suppress it DOES very strongly suggest that they have absolutely no problem with it. There’s a marked difference between allowing Nazism to exist as an expressed opinion and allowing said Nazis to form their own military units under the auspices of government.

There’s a difference between accepting that there might be members of the U.S. military, for instance, that might harbor Nazi beliefs and accepting that they start sewing death’s heads and swastikas on their uniforms. A rather huge one, if we might be as bold. An even bigger one in letting them form their own units. Imagine an openly Nazi regiment of the US Army, for instance, complete with insignia, patches and heiling.

Tell us you’d be perfectly OK with that. Tell us, please, that that wouldn’t at least raise doubts in your minds as to just where the allegiances and political leanings of the government might lie.

All we can say is that our Imperial grandpas didn’t fight the original Nazism just to have their grandkid support a government that tolerates Nazism 2.0.

We’d like to be able to at least look them in the eyes when our time comes and we meet them in the hereafter.

Everybody else can do as they please, it’s none of our business, but “they may be Nazis, but they’re our Nazis, dammit” isn’t something we’re going to buy into.

Götterdämmerung Isn’t Really What You Should Be Aiming For Here, Volodymyr

I didnt need the wiki, Sire, theres an actual book written by one of their soldiers who was an AMERICAN. So yes I know who Dirlewanger was…..as I recall he was beaten to death. Good. He can rot in hell.

Oh and Sire, two Russian missiles missed..landed in Poland killing two people. I seriously hope that was a mistake.

They’re investigating the missile. Not even Biden or the Polish are suggesting it was Russian although, of course, it could be, in which case it’s either a miss or the Russians have utterly lost their minds and decided that it’s time for the world to end, which I doubt. Another possibility is that an S-300 (air defense version) that the… Read more »

The Dems did pull this one off, buying votes with this debt forgiveness thing,..which has now been struck down by the 8th Circuit. He can take that to the USSC , now taking bets that they will also do the same…but hey their lies bought them the Senate… Oh and the news here has been bleating about the midterms too… Read more »