Götterdämmerung Isn’t Really What You Should Be Aiming For Here, Volodymyr 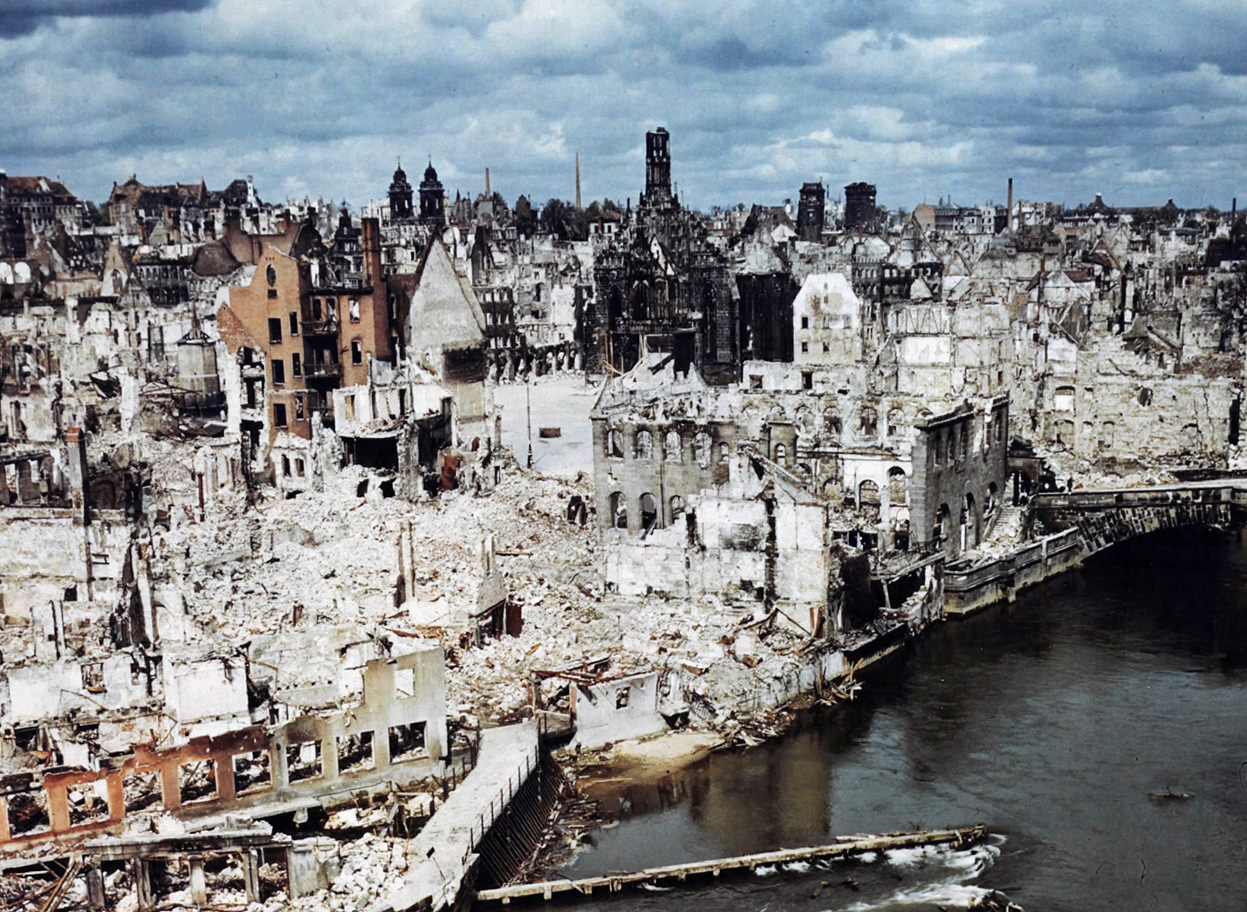 We know, it’s never polite or popular to point out facts, particularly when they don’t support what you’d like to see, so please tell us how wrong we are.

Facts are, this ongoing stupid war that was never necessary in the first place can’t end well without negotiations, unpalatable as the thought may be, and when the government of one sides in a conflict has made it literally, and we use the word in its original meaning, illegal to negotiate, well then it’s a bit hard to get started on them, isn’t it?

Yes, Volodymyr, “burning the bridges behind the troops to make them fight harder” has worked on occasion in the annals of military history, but it has failed many more times. And it has always made wars more costly.

Ukraine is never, ever going to win a war against Russia, simple math, the kind most people master before the end of middle school, proves it. The only way that Ukraine can defeat Russia on the battlefield is if NATO gets involved directly, not just by sending weapons that Ukraine is going to run out of soldiers to operate long before Russia runs out of soldiers (look up population sizes on the Google), but by deploying boots on the ground.

Which is never going to happen. Because as much as NATO (mostly Washington and their sugar daddies at Raytheon/Lockheed) love the concept of fighting to the last Ukrainian whilst making record profits on selling weapons, you should REALLY consider investing in those companies if you have money to spare, because they’re killing it, in more ways than one, right now!, they don’t much like they sound of WWIII, Thermonuclear Boogaloo.

Ending the world in order to keep Ukraine from having to ratify the Minsk Accords that they themselves were signatories to almost a decade ago and being able to place missile launchers on the border of Russia? Count us out. There might be SOME who find that acceptable, but we’re not among them, and best of luck with getting 30 NATO countries to go along with it. Remember how “easy” it was to convince our NATO allies to back us up in the “rush” to war against Afghanistan/Iraq in 2001. We do.

Not going to happen.

But if it were to happen, then we would, the moment that we ended up pushing the Russians far enough back that we looked like we’d win, trigger one of the only two conditions under which the Russian Federation, under a doctrine that is as old as nuclear weapons, would use them, which is “if a war is threatening the very existence of the independent, sovereign Russian state.”

And the world would end. Because reasons. Retarded reasons, but reasons nonetheless.

So what IS going to happen? Well, His Imperial Majesty, unlike the Western Media Conglomerate who are all-knowing and all-powerful (just ask them, they’ll tell you) doesn’t know. What we DO know is that we find it, or would find it if it weren’t so tragic, amusing that the Russian army, which has been out of weapons, soldiers, missiles, tanks, airplanes and so on and so forth since roughly March, if our wonderful media are to be believed, doesn’t seem to be moving anywhere. Sure, they get pushed back a few kilometers a week in the area that we now affectionately know as “KherSomme”, but at this rate Zelenskiy won’t be riding a white stallion across Red Square until well into the 23d century.

Meanwhile, the Russians are mobilizing. Oh yes, we know, they’re all demoralized, unequipped, poorly trained octogenarians, again according to our infallible media, but they’re doing pretty damn well for a bunch of Bidens in white and blue striped tees. And those missiles that they ran out of 8 months ago? Well, if their imaginary, non-existent missiles can do the kind of damage they’ve been doing lately, we’d be terrified to learn what actual, real missiles might do.

And keep in mind that the 300,000 is just a number published by the Russian media that we’re otherwise told to never believe. Of course they had to announce the mobilization, it would be pretty hard to keep that under wraps, even the Russian anti-Russian YouTubers currently working full time jobs asking for Bitcoins from Kazakhstan would notice. But what neither they, nor anybody else, would be able to notice what the actual number is. We, those of us who don’t get our news only from MSNBC and CNN, already know that they picked up about 100,000 more volunteers who were pissed off they hadn’t received their callup papers, but what about the rest? They could have called up 700,000 for all that we know, because who’s going to be standing around every mobilization center with a calculator tallying every single one of them.

Bottom line is, even if they have only called up 300,000, that still leaves them with about 29 million more eligible candidates. And that’s without even scraping the barrel, that’s just what’s on tap.

We’re just observing the facts here, combined with what we’ve learned about Russia and their doctrine and culture since the Cold War, and it really is utterly irrelevant what our opinion of those facts are.

If Zelenskiy doesn’t want to end up negotiating terms of unconditional surrender in a Polish border town after his poor population has suffered indescribably for his hubris, it might be time to start talking now.

And the TRUE tragedy of it all is that, had we and our NATO vassals not talked him into this situation in order to test and bleed dry Russia to the last Ukrainian, all Ukraine would have lost would have been what was in the agreement that they themselves signed in Minsk. Not a single dead Ukrainian, not one.

But at least their families can take comfort in the obscene riches that shareholders in Raytheon and Lockheed now enjoy. We don’t think they’ll share.

I suspect Volody will hold out until his swiss bank accounts reach an acceptable level, then he will “negotiate” with Vlad on how to split the loot to end the war.

The peiople of Ukraine? Why they are screwed just like all the rest of us peons. What? You expected something different, meh!

I have to disagree to some extent. The Russians have shown themselves to be a paper tiger. The Ukrainians have spent the last 6 or so years learning how the West fights a war. They recently pulled off a Thunder Run that broke the Russian defenses. They have more tanks now then when the war started. The Russians simply do… Read more »

I made no comment on war fighting ability or such, just a political observation since that is how business is done within oligarchic societies. Putin is going to want to save face and the comedian is going to want to enjoy his millions of warbicks and not get dead by poisoned umbrella, so it will end with some sort of… Read more »

I have to at least partially agree with your disagreement there 😉 The Russian Army definitely underperformed, at least as far as what I and numerous others with much more experience than I had expected. I (and they) had pretty much expected Ukraine to fold like a cheap lawn chair, to not be in the least interested in fighting a… Read more »

How much money has Putin spent on his military over the past say, twenty years? How much actual combat experience does his military have? I mean it’s one thing to have an army of four million you can call up and shove a rifle in their hands, it is yet another to call up a combat-ready and combat-tested military that… Read more »

I think the question then becomes will he run out of cash before Zelensky runs out of Ukrainians.

I think the question then becomes will he run out of cash before Zelensky runs out of Ukrainians. Ah, reality. You may not like it, I certainly don’t in this situation, but reality doesn’t much care how you feel about it, much like gravity doesn’t care much about the fact that if you jump off a tall building, you’re likely… Read more »

How much money has Putin spent on his military over the past say, twenty years? How much actual combat experience does his military have? Off the top of my head? Chechnya, Georgia and Syria. One could easily argue that those weren’t “real wars”, but they’re still three more wars than Ukraine has fought. Unless, of course, one were to call… Read more »

Off the top of my head? Chechnya, Georgia and Syria. One could easily argue that those weren’t “real wars”, but they’re still three more wars than Ukraine has fought. Yet it is Ukraine that is eating Russia’s lunch. The Soviets bit off more than they could chew in Afghanistan which arguably caused the fall of the Soviet Union. Ukraine isn’t… Read more »

It’s funny you mention that mentality Sire..because I seem to recall a certain German leader ordering the invasion of Russia under the same delusion…”one hard kick and it all comes down”….how did that work out again?

Precisely. Of course, the main difference here is that the German in question was facing, “unexpectedly”, an enemy vastly larger and more resourceful than his own nation. Putin doesn’t have that problem. Sure, the West can certainly out-produce Russia when it comes to weapons, tanks and ammo, the West can do that with BOTH arms tied behind our backs, but… Read more »

I don’t know how any of this will ultimately wash out, nor does anybody else, but I maintain that celebrating Zelensky’s imminent victory lap across Red Square mounted on a magnificent white stallion whilst Russian girls throw their panties at him might be a bit premature. I seriously doubt Zelensky has ANY intention of crossing the border into Russia, let… Read more »

And now we find out that US taxpayer $ to Ukraine was laundered by bankrupt FTX and given to Democratic candidates. Leftist mega-donor Sam Bankman–Fried was detained in the Bahamas following reports that his now-bankrupt cryptocurrency company, FTX, may have laundered Ukrainian relief money from U.S. taxpayers and redirected it back to Democrat campaigns. He was the Democrat’s second largest… Read more »

Well, it’s not exactly news that the Biden family has been laundering money through Ukraine for quite some time, but this DOES take it to a whole ‘nother level.