This is not The End. It’s a Beginning 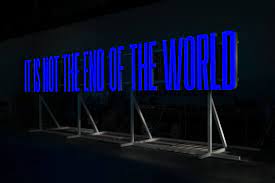 But, by all means, unfold the French Flags of surrender and be done with it, if you so desire.

The Supreme Court had the last chance to end this in an orderly fashion. Unsurprisingly, they didn’t have the stones and chose to renege on their duty to hear cases between the States, presumably to pretend later on that they din du nuffin.

So now the situation is that

, according to the “supreme” court of the land, individual states can cheat, fraud, print ballots as they see fit to get the result they want, and none of the other states have “standing” to challenge it.

We guess it’s each man to his own

, according to the “supreme court of the land” then.

That always ends well. Just watch all of human history.

We expected that there would be those who would forget their oaths at the drop of a hat. That, too, is predictable based on observed history.

The “supremes” were the first.

That still leaves the rest of us, though.

It’s going to be a fun

, interesting time ahead of us.

For certain values of “fun.”

The only answer to that has to start with gunfire, and end with nooses.

Conduct yourselves appropriately. The entire social contract is therefore dissolved.

If you swore an oath to defend the Constitution against all enemies, foreign and domestic, that bill has just come due. The government of the United States has now entered into a state of war with its own people.

If there is no Constitution, there is no law, no republic, and no allegiance due to any authority constituted under it and subservient to it. That includes the national government, and every former US state and territory. At the stroke of a pen, they have all become pretenders.

There is no Republic, there is no Rule of Law, there is no Constitution and any and all decisions made by the courts and government are therefore without authority.

Make of that what you will.

“The Supreme Court, in tossing the Texas lawsuit that was joined by seventeen states and 106 US congressman, has decreed that a state can take unconstitutional actions and violate its own election law,” West said in a press release published Friday. “Resulting in damaging effects on other states that abide by the law, while the guilty state suffers no consequences.”

The SCOTUS decision “establishes a precedent that says states can violate the U.S. Constitution and not be held accountable,” the Republican said. “This decision will have far-reaching ramifications for the future of our constitutional republic.”

“Perhaps law-abiding states should bond together and form a Union of states that will abide by the Constitution,” posed West.

I haven’t had the chance to really look into this yet. I want to know if this was a unanimous decision or if it was a split decision.

If the latter, who crossed over to help that tool Roberts destoy the Supreme Court and the nation once and for all.

Wasnt it your assertion to “look at the filings” when it came to the so-called “collusion”?

How did that work out again?

Man did YOU call that one wrong.

From my bro’s kid: http://www.dethguild.com/index.php#Trifecta_Of_Defiance “Gentlemen, it has been a pleasure and an honor knowing each and every one of you. Whatever happens from this point forward, as we transition from Cold to Open Civil War, understand that I would take back nothing I have said or done in the last year. I remain eternally unrepentant and defiant, to whatever… Read more »

Last edited 2 years ago by HempRopeAndStreetlight
0

OT, there is this thing about counting chickens before they hatch. I for one will not make any decisions before January 20, 2021. This does not translate to lack of readiness. And yes, we as a nation survived the modern era of Wilson, FDR, Carter and Obama. We may survive (as individuals) four years of Biden/Harris (if they assume office),… Read more »

I don’t think we will survive it as a nation, at least not in our current form. There is now talk of secession from people who considered it a joke with regards to the Obama, Clinton and Carter maladministrations.

Umm, seems to me that exposing massive fraud and getting a correct tally of legal votes is the primary duty of the president. That little bit about enemies foreign and domestic, eh?

No, David – if an Allegation of actual FRAUD evidence is made, the lawyers will be given about 30 seconds to detail it in open court. Unless the team is prepared to prove everything they claim, the judges have already stated they will dismiss with prejudice. THAT is why Rudy keeps saying “No Yet, your Honor”.

Ken Paxton, the Texas AG who brought his ill-fated suit to the Supreme Court has been angling for a pardon from Trump before Trump leaves office. Why?

Because the Dallas Courts say the Stste Appointed special prosecutors are beimg overpaid, and because the most demoscum county in Texas can’t get a court to punt the case forward.

What if we find out that Dominion Voting Systems was rigged? Will Biden still be president? Eric Coomer was identified by Joe Oltmann as being involved in the violent extremist group Antifa. Oltmann, who had been working undercover inside Antifa in Colorado, identified Eric Coomer as the Antifa person who said they made sure that President Trump wouldn’t win the… Read more »

Sen. Graham said that if this fraud was allowed to stand, that there would never be another Republican President.

It starts with “D”..now what was that word again?……

MY candidate didn’t win, and I searched for the excuses as to why. In 2004, your candidate was a whiney bitch of a cowardly chicken-shit, scared of his own shadow, who shot himself in the ass to get out of a war in Vietnam, so he could come home, lie, and pretend to be important to the world. In 2016,… Read more »

So now here YOU are, talking about murdering Supreme Court Justices, and probably advocating for the armed rebellion to preserve your cult leader’s position. That’s low, even for a Democrat. I threaten no one. A PREDICTION of what I suspect may be coming is, at WORST, a warning. I have never advocated an armed rebellion – again, I read tea… Read more »