So THAT’S the Plan, Stan?

First off, allow us to emphasize that we’re glad that we have A plan, it’s impossible to ever declare anything accomplished unless you have a way of describing what “success” looks like, and any general who ever walked into a battle without a plan of some sort didn’t stay a general for long

, nor did he win any battles.

So it’s good that we have a plan. We’re just not so sure how good the plan is, and it has some decidedly questionable items on it.

Let’s take a look. The Plan™ has three “phases.” To go from one phase to the next or even to go into the first phase

, a set of criteria must be met first:

Oh, where to begin. So this can only be based on statistics and case numbers reported being reliable and accurate, obviously. Which they always are, aren’t they? Such as when NYC suddenly added 3,700 deaths to their total, literally from one day to another, because now everything where it could even be speculated that the death had to do with Chinese Bat Flu was suddenly a “COVID Death™”

But we can trust the numbers, citizens, of COURSE we can!

Why would anybody fiddle with them. Sure, some people (undoubtedly Reactionary Foreign Agents and Enemies of the Revolution) have suggested that, with treatment for COVID cases being funded by the Fed, some unscrupulous persons might be tempted to be a bit “creative” in judging what is and what isn’t a Chinese Lung AIDS case, particularly now that they don’t even have to test it to call it that. Grandma passing away tragically after having tied up one of your hospital beds for weeks while going through end-stage cancer? Well, if we call it “cancer”, we’d better hope the insurance comes through without fighting us all the way, but if the certificate states “likely to be COVID-related”… Cha-CHING!

But surely nobody would be that unscrupulous, right? Particularly not in a time when hospitals are forced to lay off staff in droves because apparently the only thing you’re allowed to go to the hospital for now is the Wu Ping Cough.

And then there’s the 14 day trajectory requirement. Some clarification would be nice. So if, say, Michigan has satisfied the trajectory requirement for 13 days and then, on the 14th day, the number “unexpectedly” goes up by 0.1%? Do we reset the clock and buy the governor another two weeks of unlimited, totalitarian powers?

Nobody, that’s who. Shut up, citizen! Or else!

See the above, although “number of positive tests” is quite a bit harder to fudge than “number of cases based on pure speculation.”

The last is quite fine, in just making sure that states have the capacity in case the number suddenly goes way up again and that all healthcare workers have adequate protection (not much point in having equipment if you have nobody well enough to operate it, is there?)

And then there are the universal requirements before even beginning to think about entering any of the phases, most of which we don’t really see a problem with but you can go read for yourselves, except for these two:

Sounds good and all, right? But how, exactly, do you intend to “trace contacts” of each and every individual who has been unfortunate enough to catch Comrade Xi’s Revenge™?

Ankle bracelets? Chip implants? Mandatory patches on clothing? Mandatory GPS apps on everybody’s “smart” phones (the same method that the Bestial Butchers of Beijing has been using for years to keep track of individuals whom the regime might decide have more than their “fair share” of organs? Oh, the irony!)?

And for how long? Forever? If not, why not? This isn’t going to go away. It’s not going to be the last new flu to hit us (and yes, it is A flu. Not THE flu (which doesn’t exist anyway as it changes every year) but A flu). Does anybody really believe that such forced mass surveillance, once in place as a “temporary” measure, will ever, ever go away? We still have a few lots of beautiful ocean front property in Nevada we’d like to sell you at a ridiculously low price, if that’s the case.

Here, let us put these chains on you. They’re nice and lined with velvet and we promise, promise that they’ll come off and never come back again just as soon as… never.

Remember when we justified the shutdown by saying, correctly, that we needed to “flatten the curve” in order to keep our healthcare system from being overwhelmed? We supported that decision, still do. The best healthcare system in the world with the most advanced technology backing it up isn’t going to do you a lick of good if you run out of equipment, beds or personnel.

Made perfect sense. Also because, at the time, it was quite clear that nobody was saying that “flattening the curve” would make the Peking Plague go away, that’s not how pandemics work, but it would spread out the pain enough that we could keep going until it had run its course. Much like Tylenol doesn’t cure your cold, it just keeps you comfortable while your body fights off the disease.

We don’t hear that anymore, do we? Now it’s all “if it saves just one life”, which is idiotic on its face, particularly considering the consequences and real life price associated with the draconian and, frankly, fascistic measures being employed currently. So it saved “just one life.” It also put 22 million (and counting) out of work, made it impossible for those people to feed their families, pay their rent or mortgage, gutted what savings they might have had and shut down millions of businesses all over the country, destroying lifetimes of investments and hard work in the process, many of which will never open again.

Hey, but at least they’re alive, right? Nazzo fast, Guido. Suicide hotlines are melting down all over the country.

But we guess that Some Lives Just Don’t Matter™, eh?

And, again, it DOESN’T save “just one life.” Pandemics come and go, people die from them all the time, just as they die from a gazillion other reasons every year and, again again, “flattening the curve” just spreads the number out so we can deal with it more easily.

But here we are, hell-bent and determined to saw off the branch we’re precariously perched upon to make sure that nobody, ever, anywhere, ever dies from anything ever again.

Best of luck with that project, idiots.

What is worrisome is the fact that POTUS seems to have bought into the whole “planning” thing. Sorry, I don’t abide by the Gosplan process nor 5 year plans by our own “big government” which is what this is. The ONLY way to get this economy back on track and renew employment is for every INDIVIDUAL to make their own… Read more »

What is worrisome is the fact that POTUS seems to have bought into the whole “planning” thing. Sorry, I don’t abide by the Gosplan process nor 5 year plans by our own “big government” which is what this is. The ONLY way to get this economy back on track and renew employment is for every INDIVIDUAL to make their own… Read more »

Can’t wait for three phases. I need to find a barbershop!! 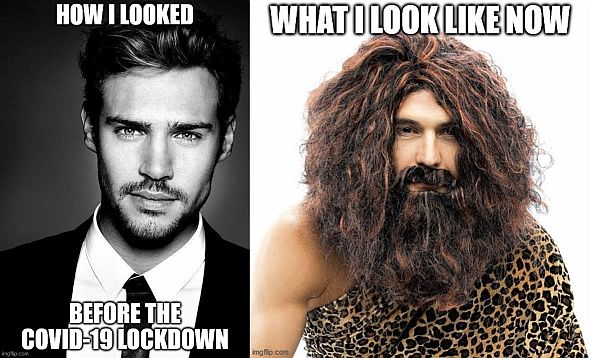