So the order has been given to deploy troops to the border as it becomes increasingly obvious that Mexican Presidente Labrador-Retriever has no intentions of keeping his lofty promises to stop the invading army of peasant rabble and MS-13 gang bangers, accompanied by the occasional Saracen wannabe splodeydope.

Oh, and let’s not forget the strategically placed pregnant mothers-in-waiting, only there for the camera optics when their fellow “caravaners” arrange for them to be shot.

When asked by the DNC AV Club if this was just a political stunt, General Mad Dog Mattis replied that his department didn’t do stunts, and the EneMedia already salivating at the thoughts of the bloody stunts they themselves are planning, should the shit hit the fan, would do well to pay heed to his words.

What can we say? This isn’t a man who beats around the bush.

Now, obviously deploying the troops is a sound and necessary move. No country throughout history lasted very long if it refused to deploy troops in its own defense when faced with an invading army, no matter how small or pitiful. And make no mistake, that “caravan” is an invading army.

Refugees don’t march through numerous countries seeking refuge, having already been offered such by the very first country they entered after having left the one they were fleeing. 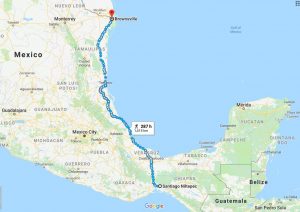 Except they don’t bother pretending to be asking for refuge. Which is why we like armies a lot more than refugee hordes. They’re at least being honest. 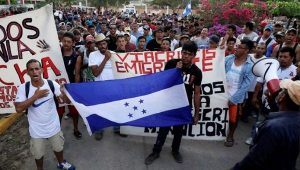 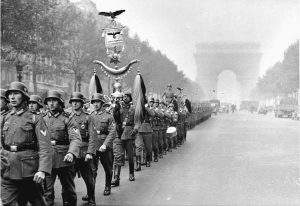 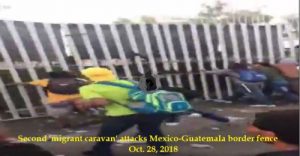 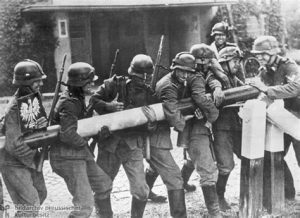 We’re sure you get the point by now.

But even though deploying troops is a necessary and prudent move, it shouldn’t be the only one. We heard the President when he stated that those countries failing to stop this army of immivaders would face serious consequences as well. After all, they are no different than, say, the Swedes when they let the Wehrmacht march through Sweden in order to get to Norway more easily. No different at all. Except in the case of Mexico and the other countries complicit in this invasion, they were given fair warning.

So it’s time to immediately put a full embargo in effect on all of those nations. No trade in, no trade out. No aid going out either. No more remittances to Mexico through U.S. banks either. If they want their share of filthy gringo cash, they can bloody well ask their sleeper agents to deliver it by hand themselves. The new trade deal with Mexico? It’s written on paper, and paper burns really well, Senor Labrador-Retriever.

If that fails to get their attention, then a full blockade would be the next logical step, but we somehow don’t believe that would be necessary. Without that filthy, disgusting, gringo cash that they claim to despise while slobbering all over themselves at the sight of a $10 bill, their economies would collapse in less time than it takes for His Imperial Majesty to brew a cup of coffee.

You think that’s a bit harsh?

Don’t get us started on what we’d do if we had the power.

We’d be delivering a document to Presidente Labrador-Retriever in his kennel stating that since he and his government had proven themselves utterly incapable of preventing his nation from being used as a staging ground for an invading army, the United States is left with no choice but to wholly annex the former state of Mexico, now known as the Protectorate of Mexico, along with all military control of its territory, effective immediately. And ten minutes after it was delivered, the armored divisions would cross the border going south at full speed.

As to the “caravan” itself?

Well, how do you treat invading armies? You set up defensive positions, wait for them to start moving and then, when you’ve got them in a killing field, you open fire with all barrels.

Let the vultures and coyotes take care of the rest.

I thought one of the more important things in battle is the element of surprise. So, let’s surprise them by being a few klicks south of the border before they even get there.

it would be a DAMN shame if every bridge, tunnel, rail line and embankment between where ever they are now and out border got blown to 5hit overnight…

what’s the point of having planes like the B-2 if we don’t use them?

Strange how the DoD doesn’t seem to share this same assessment. Apparently, someone from the DoD or another law enforcement agency leaked out the JFLCC Threat Working Group (Operation Faithful Patriot) 271000ROCT18 the other day, and it has a different assessment. Obviously it does. Oddly, though, the DHS’s official website (not a leaked document from G-d knows where) seems to… Read more »

We could make them our “useful idiots” by leaking false info about decoy operations & station forces to suggest, say, coastal assaults to distract from ground movements.

We’d be delivering a document to Presidente Labrador-Retriever in his kennel stating that since he and his government had proven themselves utterly incapable of preventing his nation from being used as a staging ground for an invading army, the United States is left with no choice but to wholly annex the former state of Mexico, now known as the Protectorate… Read more »

I’m more inclined to go with these babies… https://m.youtube.com/watch?v=CY9gojFu-_U

Depends. If the unarmoured targets are in a narrow column in a confined space as they were on that approach to the Mexican border gate in the photos of that mess, or in a similar relatively confined area, then nothing beats cannister. If they’re in a mass, but relatively spread out over a large open area, then cluster bombs… but… Read more »

Don’t get me wrong… I’m a YUUUUUGE fan of FAEs!!! Nothing would be more satisfying than randomly-timed/placed FAEs being dropped all along the border, 24/7/365, just to keep the area clear. Repeat drops on some areas, so they can’t assume any areas are safe after a blast has occurred.

Snerk. Sadly, D.J. there’s a LOT fewer of us Rotties than there used to be. I’m not sure that there are thirty regular commenters here these days – you’d have to get all of them at once biting your head off to get even close to that now. There’s even fewer of us old, original Rotties like me left here,… Read more »