A Juxtaposition In Rights In Two Photos 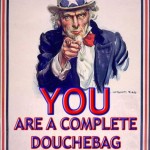 Recently, with a simple photo, a young college female in Tennessee sent the entire Idiotarian Alternate Universe into full-fledged, spittle-filled OUTRAGE™. “What”, you’re obviously asking, “could have sent their rectums into spasms of angst?” Let us, in our ever-so-helpful benevolence, present the offending photo. (Those of a weak continence should avert their eyes at this point.) 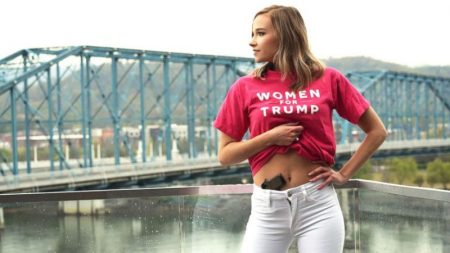 Shocking, we know. How DARE someone post a photo of themselves exercising their UNINFRINGEABLE 2nd Amendment right?

Now, let’s take a look at something that the frothing fucktards defend to the death as a “right” that should be celebrated across the land….

(Here’s where we have to put the obligatory “NSWF!” disclaimer, just in case someone’s place of employment hasn’t yet gotten around to blocking this site. You’ve been warned.) 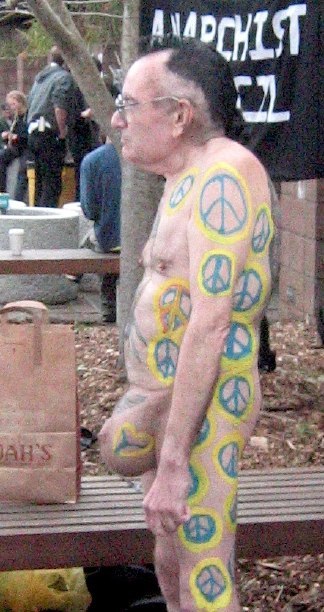 Yeah. That’s “Inflated Scrotum Dude”, a stalwart of Leftard shitfests all up and down the Marx Coast over the years. If you even suggest that this sick, twisted, demented motherfucker should keep his cantaloupe-sized nutsac covered and not be flaunting it on a public setting, you’re labeled a “Fascist!™” “Literally Worse Than Hitler!™”.

So, yeah, you feckless fuckweasels, hold your breath and shit in your hand and wonder why we don’t give a fuck about your “feelings”, as you try to take away our UNINFRINGEABLE 2nd Amendment right. Molon Labe, motherfuckers.

That was low down and mean! Can’t unsee that second photo now, and it was not even RR posting same. Shame!

Pod, you can’t say you weren’t warned. Don’t turn all Snowflake on us. 😀

California can’t slide into the ocean soon enough, they are contaminating the rest of the nation with their insanity. Santo de San Andreas hear our plea.

Scrolling slowly, admiring the young lady. When the top of the moonbat’s head showed up and I started to see things, a quick hit of the page down button was indicated. The next things I saw was cmments. Back to the eye bleach at the top! FYI Some of the comments on twitter remarked that she should have a proper… Read more »

Yeow! BC. Isn’t this just a true example of what the left holds dear? Big balls and no johnson…sounds like BJ Klintoon.
Progs and LLL’s should inflate their heads to match their ego.
Wack-a-mole would take off on a national scale and create a whole new and entertaining area of sport.
#KillAllPandas

OH GAWD, i fondly remember that whole “Breasts Not Bombs” period and the inflated scrotums that bedazzled my beloved Berkeley here in the Bay Area so many years ago. Reminds me to go visit Zombietime and see what he’s been up to. He and his posts/photos are a treasure.

I’m going to post something to fix the second image.

Surprisingly, it’s work safe despite the name. However, the eye bleach is quite pleasing.

While the language of the 2nd Amendment states that the right to keep and bear arms shall not be infringed, the judicial history of the nation shows that it is actually quite easily capable of being infringed, and is, in fact, infringed with great regularity. Notably, the citizenry gives less than a fuck about said infringements, because all of them… Read more »

angrywebmaster @ #:
That was eye candy, not something that required eye bleach. I like it!!

Terrapod @ #: RR took lessons from BC.

Sir Fresh Sign @ #: OMG! I had forgotten about Zombietime. Thanks for the reminder.

A few years back, The Wife attended a conference in San Francisco. She asked me if I had any tips. I says “Yeah, whatever the fuck you do, stay the fuck off of fucking Castro Street. What does her sister do? Yup, signs them up for a trolley tour that heads down Castro Street. Old trolls and bears with their… Read more »

No. But, I’ll warn ya’.
Poofers, trannies and queens is some of what you’ll find there, I suppose. Also, the most overall depraved that genre has to offer and their dens of iniquity where they reside
There’s no lack of pics and videos if you have an urge to investigate.

There’s no lack of pics and videos if you have an urge to investigate. Trillions, nay, quadrillions, of brain cells have been destroyed over the years by simply clicking on links referring to “Castro Street” and/or “Folsom Street Fair”. In the deepest, darkest recesses of MY mind, visions, such as those found at those links, could not even begin to… Read more »

If they can do that to our Imperial Torturer…NO THANKS.

I think that is one fine hair trigger.