Oh Noes, by No Means Should School be “Uncomfortable”

Why, it might hurt the precious little snowflakes’ feewings! And isn’t pandering to their pwecious feewings what an education is all about? (via our most excellent sestrichka)

After The Adventures of Huckleberry Finn was published in 1885, the book was boycotted in some places in the United States for portraying friendship between a black man and a white boy.

And that was absolutely taboo back then. The Democrats would have none of that racial fraternization, nosirree! The Democrats are still at it, except now they’re too cowardly to admit that they don’t much like the thought of whites and blacks being friends.

This week, a Montgomery County school removed Huckleberry Finn from its curriculum after a group of students said the book made them uncomfortable.

Get that? School is making the poor dears “uncomfortable”, and we can’t have that! We certainly can’t expose the poor little fragile freaks to something like “education” in school of all places!

principal Art Hall said in a letter to parents this week.

“We have all come to the conclusion that the community costs of reading this book in 11th grade outweigh the literary benefits,” Hall said in his letter.

The book’s use of the N-word was challenging for some students, who felt the school was not being inclusive, Hall said this week.

Soooo… The school is not being “inclusive” (whatever the hell the social justice wankers mean by that) because of something they read in a book? Did we miss something here? Did the teacher stand on top of his desk yelling “nigger, nigger, nigger” at the top of his lungs? Or is it merely the fact that there existed a time when blacks were, historically, referred to as “niggers?” Why, let’s airbrush history! That’s so very… Prozi of you. 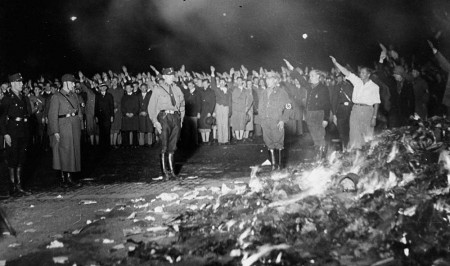 The more times change, the more Prozis remain the same.

This is the kind of thing which makes me think the left is just fucked, long term. Someday, these kids will be adults, legally if not psychologically. How the fuck are these little pansies going to have the stomach for the fights that matter if they can’t handle a words in a fucking book? And why the blue blazes are… Read more »

Muzzy – Imperial Ignorant Slut says: If anyone needs me, I’ll be out burning copies of Sophie’s Choice to make sure the Holocaust didn’t happen. It didn’t work with the Koran I had. I suppose I’ll settle for destroying the little pocket editions the jihadis carry, as long as it is a package deal. Just toss the lot of ’em… Read more »

The Democrats would have none of that racial fraternization, nosirree

There are very few Democrats/Progressives/Leftists/Socialists today that aren’t racist to the core.

Here’s a very telling look at liberal philosophy. Iraqi activist group Mosul Eye says the ISIS Shar’ia Board issued a savage “oral fatwa (an Islamic term for a religious decree)” to its members authorising them to “kill newborn babies with Down’s Syndrome and congenital deformities and disabled children”. The activists recorded more than 38 confirmed cases of killing babies with… Read more »