Spitting On The Corps

Hey I’m as tolerant as the next person on the gay ‘issue’, but some things are just too sacrosanct to use as props. Here is a prime example that just sickens me. 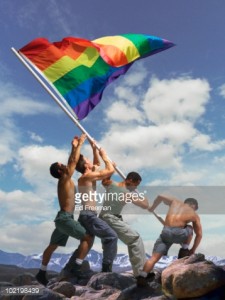 The implication that last Friday’s SCOTUS ruling can be likened to the sheer hell that our courageous Marine Corps faced taking that mountain is beyond the absurd. Yes, I know it’s a First Amendment issue and they have every right to produce and publish such a mockery, but damned if I’m not going to speak out about it. The LGBT movement didn’t take a mountain with blood, guts and courage, they merely caught the right bench at the right time in history to make “progress”. Mind you, progress that flies in the face of biology and G-d’s creation of us all.

I suppose they miss the irony that those very men on Iwo Jima died in getting that flag raised in order for them to be where they are today, is lost entirely on them. In doing so they spit on the valor of the United States Marine Corps.

How about a smidgeon of gratitude and leave one of the very symbols of America’s greatness alone.

JB staying afloat in a sea of blue.

Bloody scumbags and their sexual obsession, immaturity, and dysfunction. Nothing says “It’s about love” like half-naked men making mockery of a symbol of true sacrifice.

There is going to be violence over this decision. I won’t be a bit surprised to see at least one justice assassinated over this and the other bad decisions from this session. And of course the RINO’s have caved in. McConnell and Graham said “Well the court has spoken so it’s the law.” No it isn’t and the very fact… Read more »

Kind’a glad they photoshopped a rock over the guy on the ground.

Kind’a glad they photoshopped a rock over the guy on the ground.

Photoshop? Someone could easily turn their trendy banner into, say, a German flag ca. 1940–or the Stars & Stripes upside-down.

They’d never get this back.

Article III
Section 2
In all the other Cases before mentioned, the supreme Court shall have appellate Jurisdiction, both as to Law and Fact, with such Exceptions, and under such Regulations as the Congress shall make.

Speaking on behalf and in the voice of my departed “Grandpa Mike” (a veteran of combat on Tarawa, Saipan and Okinawa): What the hell is wrongwith you people? Mike suffered grievous wounds on Tarawa, including having one side of his body torn up by a mortar round and a bayonet thrust to his left thigh (N.B.: A loaded Garand beats… Read more »

Welcome to the United Socialist States of Amerika where it’s history is open for mock and ridicule in an effort to minimalize and eventually eliminate the historic good that Americans have done. We need to worship gay marriage “hero’s”, we need to worship the High Priests of the religion of Global Warming. The destruction of America was ingenious. Set it… Read more »

For liberals, the ends justify the means. The image of the Marines on Iwo is one I would have thought all Americans, regardless of their personal or collective neuroses, would have been willing to let stand for the powerful message it is. Alas, no. An opportunity to degrade both history and morality while enraging their ideological opponents can not be… Read more »

So, we can go by what Jesus Christ says about marriage, or what Ru Paul says. Decisions, decisions…. Sacrament, schmacrament, say the Sodomites. You will submit, or we will destroy you. Daniel Greenfield, Sultan Knish, has the right of it: this is all about power for them. Orwell nailed it, too: [Winston’s torturer, O’Brien]: “There will be no loyalty, except… Read more »

I want my old country back.

Sacrament, schmacrament, say the Sodomites. You will submit, or we will destroy you.

That threat only works with people who play the legal game. We aim to misbehave.

This turns out, of course, to be Commie pipe-dream.

Jaybear, Colonel of Imperial Ancient Artillery @ #: “killing the unbeliever is NOT a doctrine of the Christian church.” In the assorted *current* various iterations of Christianity, that’s true enough. In the past, that was most definitely not the case. Not only were unbelievers slaughtered with church approval, even the faithful of other sects were put to the sword. As… Read more »

Fa Cube Itches says: In the assorted *current* various iterations of Christianity, that’s true enough. In the past, that was most definitely not the case. Not only were unbelievers slaughtered with church approval, even the faithful of other sects were put to the sword. As Arnaud Amalric put it: “Caedite eos. Novit enim Dominus qui sunt eius.” It took quite… Read more »