Sixty-four years ago today North Korean troops poured across the 38th Parallel, kicking off the first armed confrontation of the “Cold” War involving U.S. troops. Three years and 53,000 American lives later the war ground to a halt in stalemate.

Our soldiers and Marines fought in combat every bit as intense as that of WWII, against overwhelming numbers, in some of the worst weather American’s have ever endured, and stemmed the Communist tide, allowing  a prosperous and vibrant South Korea to survive and join the community of nations. South Korea didn’t forget the sacrifices made for their survival and fought along side us in Vietnam, their tough as nails and fearless soldiers and Marines earning the undying respect and admiration of their American comrades in arms, a reputation they still hold with the following generations of vets.

Most Americans today probably don’t even know that we fought there, and if they do they couldn’t tell you why. Fewer still could tell you that we are still technically at war with North Korea and that there are frequent cross border firefights and NorK incursions into the South.

The sacrifices and valor of Korean vets, many of them WWII “retreads” pressed back into emergency service during the first dire days of the war, should never be forgotten. 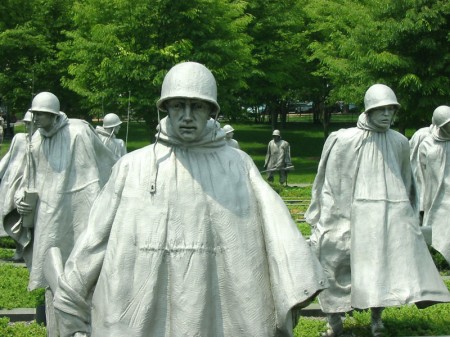 And going on now:

When I was active duty, I met Cpl Rudolfo “Rudy” Hernandez at a Rakkasan Reunion. Truly one of the most amazing stories I ever heard. The stories out of Korea were every bit as brutal as you heard a few years prior in the European and Pacific theaters. God bless every one of ’em.

My dad served in Korea, 1951-1953. He came home with a chestful of ribbons, some Chinese scrap iron in his hip, and a full complement of demons, which he fought for the rest of his life. One of the few times I ever saw him cry was when I left for Korea in 1976. He said “I’m sorry, they wouldn’t… Read more »

Okay – this is really OT and I’m sorry about that, but I need to direct someone to ‘We Are Sith” – where is it?

Lest we forget, the Korean War was a NATO effort involving troops from a dozen nations.

A good start to reading about the war is recounted in The Last Stand of Fox Company. I’m sure Crunchie and Crumb Crunchie know about this as it is highlighted in the Marine Museum. Just google it. If reading it does not swell your chest and bring tears to your eyes you are not an American.

Yes, but enough about the damnyankees 😉

LC MuscleDaddy says: Okay – this is really OT and I’m sorry about that, but I need to direct someone to ‘We Are Sith” – where is it? – MD Last thing I have is the URL, which was Let slip the dogs of Law! but it returns nothing but gibberish now. UPDATE: But wait, it’s still up at Sir… Read more »

Lest we forget, the Korean War was a NATO effort involving troops from a dozen nations.

U.N. actually, but yes, there were troops from Britain, Greece, Turkey, South Africa, even Columbia and Thailand. .

Yes, there were. Every time I see one of these threads, no offence, Crunchie, I feel almost obliged to remind many that the US were not the only ones to lose people in that struggle, and that the South Koreans themselves paid with their dearest blood.

My deepest respects to you, friend Crunchie, as always.

Much thanks – maybe it entices Chim to come play over here…

harry truman started that war when he stated that the us had no interest in that part of the world when the commies invaded the south harry looked like an ass hole.then he would not send enought troops to finish off the commies and any move that MAcArthur made harry would inform the un which told the commies what was… Read more »

1. Paragraphs, for the love of God.

LCBrendan @ #: I’m reminded of when I did an internship @ the public defender’s office – – on my last day, I printed off two whole packs of paper, filled with nothing but periods. On my way out of the office, I stopped at each attorney’s office, peeled off a handful from the stack, dropped it on the respective… Read more »

I am reliably informed Bruce has 2 brain cells.

One is lost, the other is out looking for it.

Both my uncles fought in Korea. Clyde was a forward artillery spotter.

Y’all might enjoy this: citizen pulls over an Illinois state trooper! watch the whole thing.

This has nothing to do with Korea, except to provide a favorable comparison to the U.S. THE SUPREME COURT JUST RULED IN FAVOR OF HOBBY LOBBY AND THE RIGHT OF CORPORATIONS TO REFUSE TO GIVE IN TO OBAMACARE IF IT VIOLATES THEIR RELIGIOUS FREEDOM!! However, it was by a 5-4 decisioon, which means that there are 4 Justices who don’t… Read more »

Hillary Clinton Slams Hobby Lobby Ruling by Supreme Court Former secretary of state Hillary Clinton on Monday chastised the Supreme Court for ruling that an employer can refuse to provide women with contraception on religious grounds. “Well I obviously disagree,” Clinton said when asked about the court’s 5-4 decision during the Aspen Ideas Festival in Colorado. “I disagree with the… Read more »